Bitcoin what about the next downside target December 03, 2018

Bitcoin dropped as expected after the near-term resistance retest and now it should approach and reach a very strong and critical dynamic support. A further drop will force the altcoins to drop as well. It is trading at 3900 level and maybe it will approach and reach the 3000 psychological level in the upcoming period.

I will also talk about a potential upside movement if the rate will respect my scenario, but right now I want to show you the short-term perspective. 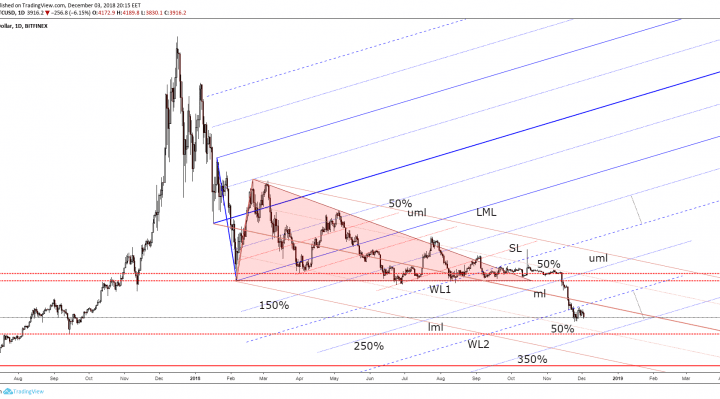 Bitcoin has retested the broken WL2, but it has failed to close near it and now approaches the 3657.6 former low. It remains to see what will happen because the rate has failed to retest also the median line (ml) of the descending pitchfork, technically, it is expected to drop.

Support can be found at the downside 50% Fibonacci line, at 350% Fibonacci line, and at the 2980 static support level. It is very, very important to see what will happen when the rate will reach the 50% line, a false breakdown followed by a retest or by a failure to reach it will announce a significant upside movement. Price could bounce back also if the rate will fail to reach the 50% line and if it will continue to move sideways and to make higher lows.

A valid breakdown below the mentioned support levels it will signal and confirm a further drop. Personally, I believe that we may see another minor rebound before the rate will try to make a valid breakdown. It could rebound on the short-term and could approach and reach the median line (ml) if it will fail to reach the 3657.6 former low.