Bitcoin prices moved higher during the New York session on Tuesday in hopes of reclaiming their record high of $34,810.

The flagship cryptocurrency logged an intraday high near $34,500 around 1800 EST, up 24.65 percent from its session low of $27,678. Traders took advantage of the local bottom to raise their bids on BTC/USD that has already surged by more than 800 percent from its mid-March nadir.

Fundamentally, Bitcoin’s latest rebound came against the backdrop of JPMorgan’s bombastic bullish call, SkyBridge Capital’s new crypto investment fund announcement, and the runoff elections in Georgia. But in the middle of all the upside catalysts was a common bearish factor: the US dollar.

The greenback’s strength against a basket of foreign currencies weakened further into the Tuesday session as it fell by 0.42 percent to hit its lowest level since April 2018. That marked the continuation of a medium-term downtrend that has witnessed the dollar falling by more than 12 percent since March 2020. 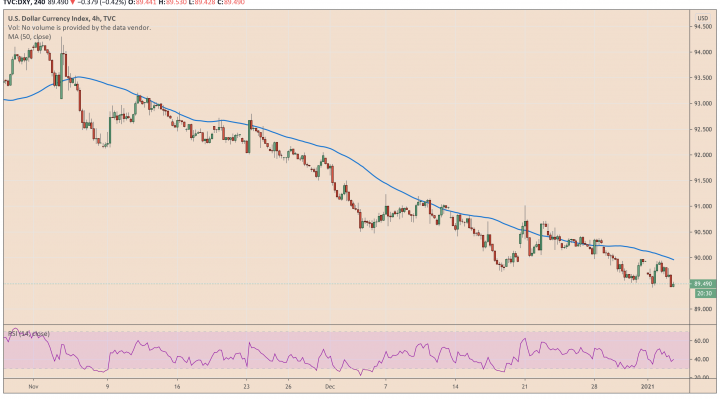 US Dollar Index continues its plunge on the second trading day of 2021. Source: DXY on TradingView.com

That partially explains why JPMorgan raised its Bitcoin price projection to $146,000 by the end of 2021. The bank’s strategists led by Nikolas Panigirtzoglou made the bullish call on anticipation that the cryptocurrency might end up mousetrapping a portion of the gold’s market cap.

Anthony Scaramucci, the founder of Skybring Capital, gave a similar reason as his inspiration to launch the “Skybridge Bitcoin Fund”  with a $310 million investment.

Meanwhile, investors practiced caution in the dollar markets as Georgia conducted a decisive run-off election for the US Senate’s two seats.

Democrats lagged Republicans by 48-50. If President-elect Joe Biden’s administration wins both seats, it will pave the way for an additional fiscal stimulus package. The reason: Vice President-elect Kamala Harris holds the right to vote in case the Senate splits 50-50.

That serves as bad news for the US dollar. Bitcoin traders may have considered the event as bullish for the cryptocurrency, given its negative correlation with the dollar since March 2020. 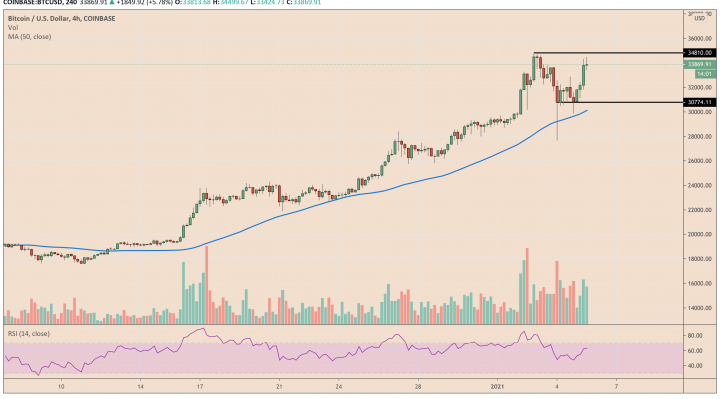 In retrospect, the Double Top Reversal is a bearish reversal pattern, made up of two consecutive peaks that are roughly equal, with a moderate trough in-between. It means the BTC/USD exchange rate risks correcting back to $30,000 in the coming sessions, followed by a deeper breakout move towards $26,000.

Any hint of excessive upside speculation could validate the Double Top reversal pattern. Meanwhile, if fundamentals continue to offset technicals—as they have done so far in the last two weeks—the Bitcoin price is looking to hit yet another record high.