Bitcoin Price Could Close below $10K as Downside Continues

The price of bitcoin fell for the second consecutive session on Sunday as investors factored in the objections raised by US President Donald Trump.

Against a weaker dollar, the bitcoin price today slumped by as much as 9.78 percent to establish an intraday low of $1,0263.17, its most significant daily drop since June 30. Nevertheless, the cryptocurrency remained stronger against the majority of altcoins, with its dominance going as high as 65.7 percent. 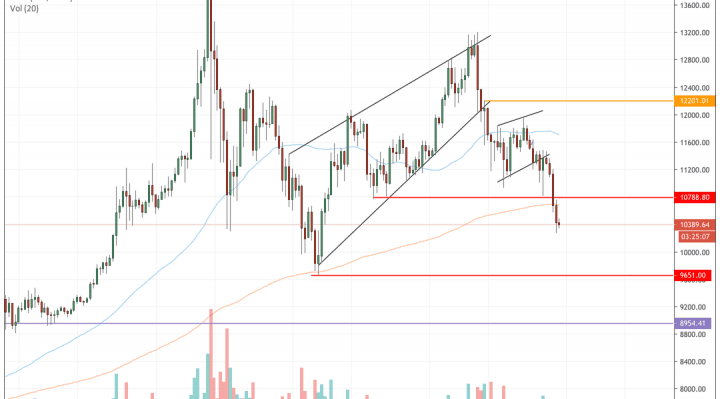 The move downside pushed the bitcoin price below $10,788.80, a crucial support level. The breakdown appeared with a rise in volume, hinting that the cryptocurrency is looking to extend its downward action. A Rising Wedge pattern, as indicated via an ascending contracting channel, also implies an aggressive bearish correction phase in the bitcoin market, with the next pullback target situated below the psychological $10,o00 level – at $9,651.

The bitcoin price correction, which appears technical, nevertheless coincides with a string of adverse events in the market. On Thursday, Trump launched its first attack on bitcoin, stating that he is not much of a fan of the cryptocurrency because of its use in criminal operations and lack of underlying value. The same day, Federal Reserve Chairman Jerome Powell also said that bitcoin, to him, is not money but a speculative asset.

“Almost no one uses bitcoin for payments, they use it more as an alternative to gold,” Powell said during a congressional hearing. “It’s a speculative store of value.”

The price of BTC dropped by more than 22 percent from the time Trump and Powell made their ant-cryptocurrency statements. It could be partially due to Libra, Facebook’s upcoming cryptocurrency project, that received an equal amount of bashing from the two. Investors probably diverted their capital to S&p 500 and Gold, markets with better interim bullish bias, especially after Powell’s hint to cut rates in July.

How far we’ve come. The Chairman of the Federal Reserve just compared bitcoin to gold

Josh Rager, a prominent market analyst, said today that BTC has a strong likelihood of retesting a robust weekly support area towards the $9,550 level.

Where do you think the BTC price is heading? Tell us in the comments section below.