Bitcoin Price Outlook: BTC/USD Preparing Base for Bounce Ahead

Bitcoin kicked off the new week with modest gains but later pulled back marginally on profit-taking sentiment.

At its intraday top, BTC/USD was trading at circa $10,956 during the early Asian trading session. The pair started correcting later only to find a concrete base near the $10,830-level. A bounce-back ensured but could not close above the local top, leaving Bitcoin fluctuating in a sideways range.

BTC/USD, meanwhile, further maintained a support floor near its 20-hour moving average (the green wave in the chart below). That offered the pair a double-layered footing should it await another leg to the upside. Traders may want to accumulate Bitcoins or open new long positions near the 20-HMA wave. 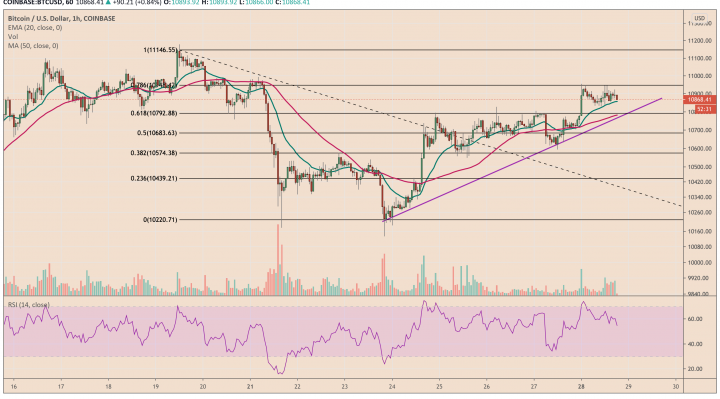 Simultaneously, a break below 20-WMA or $10,830 support exposes Bitcoin towards $10,792. The level coincides with the ascending trendline (pink), a slope that has lately served as a reliable accumulation zone for daytraders. Thereon, BTC/USD could attempt another pullback towards the $10,950-11,000 area.

The Bitcoin market is bullish on the daily chart. Despite the latest downside correction, BTC/USD is trading more than 180 percent higher from its mid-March low near $3,858. Meanwhile, the pair is trending upward inside an Ascending Channel formation, which hints at another big leg upward. 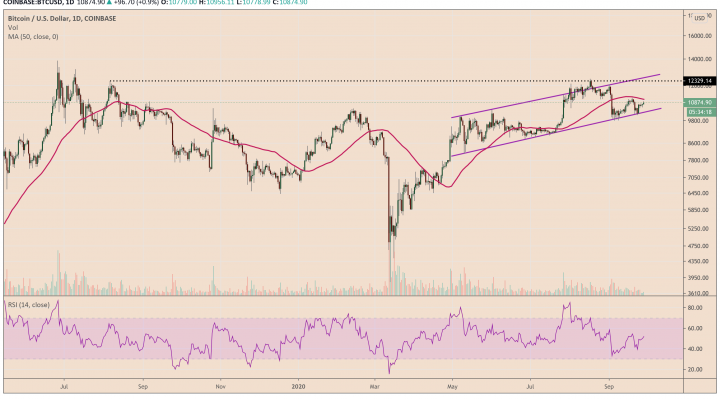 Bitcoin is inching for a breakout to $12,000. Source: TradingView.com

Bitcoin now awaits a close above its 50-day moving average (the red wave) to confirm an extended upside move towards the Channel’s upper trendline. That would mean a swing towards the $12,000 level or above, an area that has earlier witnessed extreme selling pressure.

He added that “the inability to determine in which direction the trend will result makes the trading range between these support and resistance levels a reasonable no-trade zone.”