Bitcoin gave up momentum in over the last 24 hours as a FUD-like rumor lured traders into panic selling the year’s most profitable asset.

Spot bitcoin price plunged $311, or 3.27 percent, to $9,238 per token shortly after the New York opening bell. Earlier today, the cryptocurrency was changing hands for as much as $9,568. Meanwhile, on Thursday, it had established an intraday high just above the $9,800 level. 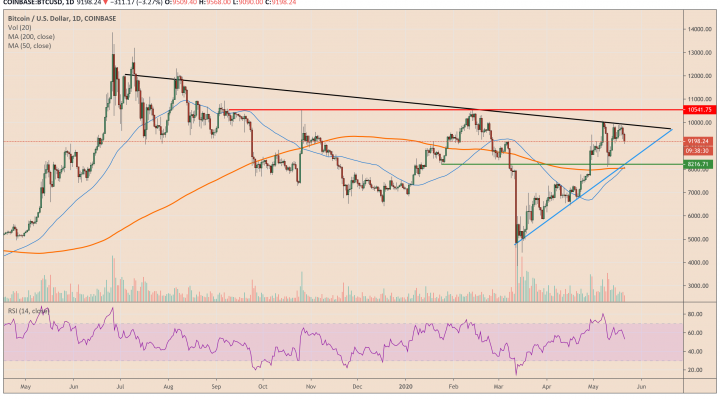 The $600-fall started after a mysterious entity moved about 40 BTC from a wallet that may or may not belong to Satoshi Nakamoto, the pseudonymous creator of the Bitcoin protocol. Traders perceived it as a threat to the cryptocurrency’s ecosystem since Nakamoto can single-handedly crash the market by dumping his 1.1 million BTC.

Later, it turned out to be a rumor. While the clarification helped to add a few hundred dollars to Bitcoin’s pullback attempt, it didn’t exactly translate into a big move towards $10,000.

Moving further into the Thursday session, bitcoin risks undergoing a deeper fall. The first psychological support sits near $9,000, but its technical extension is as low as $8,200. The said level has served as a bias indicator for Bitcoin’s short-term trends. Moving below it would mean extended declines below $7,500. But that remains a worst interim scenario.

One has to look beyond technical narratives and focus on Bitcoin’s growth as an asset amid the coronavirus pandemic. The cryptocurrency remains one of the most profitable asset on a year-to-date period. Meanwhile, it signals more upside due to the involvement of big investors in the cryptocurrency space.

Billionaire hedge fund manager, Paul Tudor Jones, for instance, has allocated 1-2 percent of his $22 billion-fund to Bitcoin futures. He sees the cryptocurrency as an experimental hedge against inflation caused by the central banks’ massive stimulus package to contain the economic damage caused by the Covid19 pandemic.

With that said, Bitcoin’s latest correction is eyebrow-raising but not alarming, given the asset pulled back after rising 22 percent in a week – and more than 150 percent since March.

Traders would likely find support above $8.2K, so better watch out for any buying action accompanied by higher volumes to enter an interim long position. Spot traders may use it to fill their bags for the long-term, as a global financial crisis puts more and more pressure on investors to diversify outside the traditonal space.