Bitcoin Pulls Off 2-Week Highs to Trim Weekly Gains Below $7,200

The price of bitcoin has failed to build on the sharp rise experienced late on Wednesday after pulling back to trim current weekly gains. The pioneer cryptocurrency rallied to top $7.417 in mid-week a new 2-week high but has since lost momentum and fallen to settle below the $7,200 key level.

Bitcoin has been trading within a slightly descending wedge in a polyline movement since late November and appears set to maintain this trend through December.

Since the BTC/USD is basically bitcoin trading against the US Dollar, any fundamental activity the boost the dollar is likely to have some impact on the price of bitcoin. However, the pioneer cryptocurrency also relies heavily on the overall global economic outlook and growth, as well as, the general view towards cryptocurrencies.

The cost of producing bitcoin continues to rise as the pioneer crypto retains its dominance in the cryptocurrency market. Bitcoin has been tipped by one of the renowned crypto investors, Tim Draper, to top $250,000 in 2020. However, that looks like a long shot as pressure remains amid some growing concerns about regulation and government cryptocurrencies.

The price of bitcoin is also facing some pressure from a resurgence US dollar following the latest round of economic data and breakthrough talks between the US and China regarding a potential trade deal in the near future. 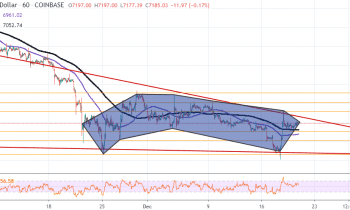 Technically, the price of bitcoin appears to be going through a rough patch with a notable lack of upward momentum amid an extended period of sideways movement. The bitcoin price recently bottomed at around $6,400 and rallied within a few hours to top $7,400 but has now pulled back below $7,200, which again illustrates the level of volatility in the bitcoin price. 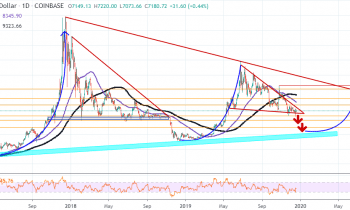 In the daily chart, the price of bitcoin appears to be heading for a major drop, possibly bottoming at around $4,000 before embarking on the next bull-run. If the cycles are repeated as it would appear to be the case, then the bears will be more optimistic going into the early stages of next year.