The benchmark cryptocurrency rose 0.1 percent to circa $9,139 following the New York opening bell. Its modest surge appeared as rival cryptocurrencies – especially those from the decentralized finance sector – kept delivering skyrocketing rallies for its investors.

LEND, for instance, surged more than 11 percent against the US dollar during the Friday session. It also rallied sharply against Bitcoin – by close to 12 percent. That marked one of the many cases wherein traders shifted their BTC capital into an emerging altcoin market. 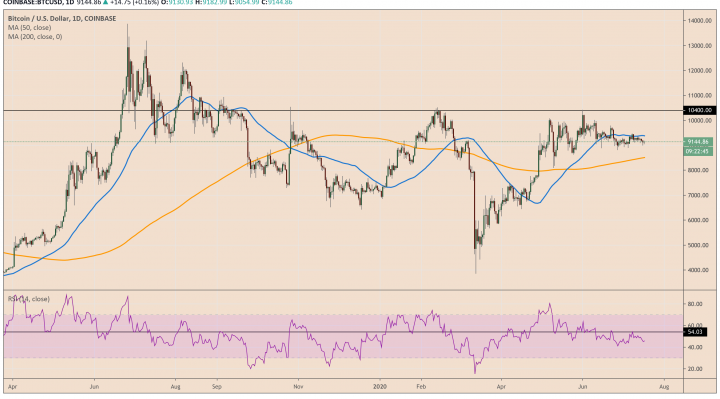 Bitcoin price stuck inside a range for the last two weeks. Source: TradingView.com

Part of the reason was Bitcoin’s lackluster price action over the last two weeks. The cryptocurrency has repeatedly failed to sustain its breakout above $9,300. On the other hand, its downside bias also remains capped by a substantial support level near $9,100. At its two-week high, BTCUSD was trading at $9,475.

That has led traders to hunt for yields elsewhere. And the DeFi space has emerged as an attractive alternative as long as Bitcoin remains rangebound.

Another reason why Bitcoin is losing its steam is its overreliance on the US stock market. Since March 2020, the cryptocurrency has erratically tailed the S&P 500. The copycat moves were also visible on Friday as Bitcoin rose almost alongside the US benchmark index.

That certainly leaves Bitcoin exposed to the macro narratives – and they are not looking good. The S&P 500’s gains come at a time of the escalating US-China tensions, rising number of coronavirus cases in US states, a slowdown in job recovery, and the potential economic fallout.

Meanwhile, what’s holding the macro bullish bias so far are optimistic vaccine trials, reviving business activities in areas that are past their lockdown, and expectation that the Federal Reserve and the US government will keep injecting money to walk the economy through the health crisis.

Risks Ahead for Bitcoin

Bitcoin and the S&P 500 risks shedding their gains next week as big corporations release their second-quarter earnings. Data service FactSet said last week that the S&P 500 earnings per share would fall by 45 percent. That leaves investors with two choices: either sell their stocks at local tops or stay glued to them in anticipation of positive forward guidance.

Meanwhile, all Bitcoin can do is watch the show like a mute spectator. The cryptocurrency has nothing going on on its own with DeFi coins taking most of the traders’ attention.