Bitcoin plunged after the extended sideways movement and could crash the crypto market again. It has reached new lows after the breakdown below the 6000 psychological level. Bitcoin wasn’t so low since November 2017.

The current drop was expected after the failure to give birth to an important upside movement. I’ve told you in the last week and 2,3 months that Bitcoin could start a significant sell-off if the rate will fail to run away from the 6000 psychological level.

Price has continued to move between the 6000 and the 7000 levels, the last aggressive breakout above the 7000 psychological level it has signaled that we may have another bearish momentum.

It remains to see what will really happen because the rate could come back higher to test and retest the broken static support area before it will drop much deeper. 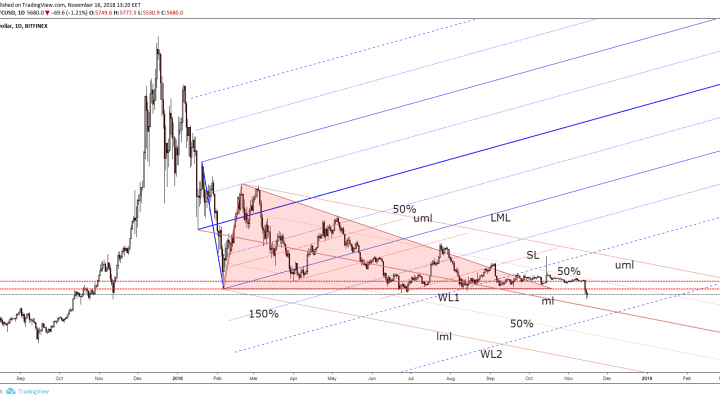 A larger sell-off will come only if the rate will make a valid breakdown below the median line (ml) of the descending pitchfork.

The failure to close and stabilize above the upside 50% Fibonacci line of the descending pitchfork could send the rate below the median line (ml) and below the WL2. A potential upside movement will appear only if the rate will increase aggressively and will pass above the 50% and this will turn into a false breakdown below the 6000 level, but this scenario is less likely to happen.