Bitcoin Up as Currency Troubles Loom Over Economy

The price of bitcoin closed above the $10,000 level helped by the growing negative sentiments in the currency markets.

The benchmark cryptoasset surged by 6.2 percent on a 24-hour adjusted timeframe, according to data fetched by US-based Coinbase exchange. At its intraday high, bitcoin was trading at $10,500, a psychological resistance level, before correcting lower by about $100 ahead of the European market open. 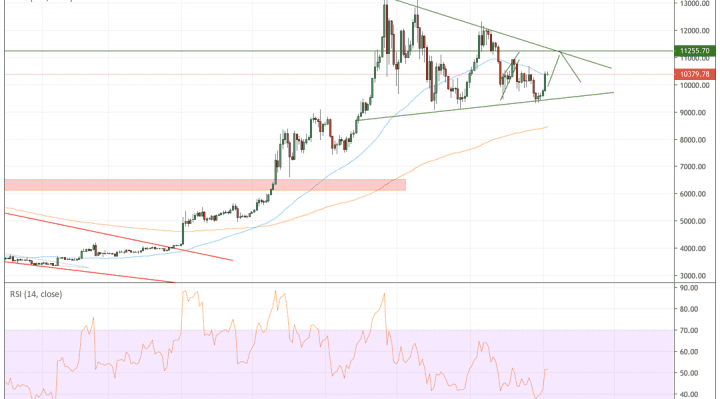 The surge in bitcoin prices occurred at the time when the Chinese Yuan hit its 11-year low. According to a Financial Times report, a weakening national currency is prompting Chinese investors to fly into perceived safe-haven assets, such as Gold and Japanese Yen. Bitcoin, whose safe-haven status remain under doubts, still offers the Chinese to circumvent state-imposed capital controls. Analysts believe it is the reason why the bitcoin price surges whenever yuan slips.

Bloomberg market strategists say yuan’s correlation with bitcoin is rising, indicating that the ongoing tit-for-tat tariff war between the US and China is helping the cryptocurrency rise further.

Bitcoin’s correlation with the USD/yuan is rising. @business market strategists point out it may reflect the view of #bitcoin as digital gold. Weakening yuan is symptom of the trade war and its effects on economic growth. In turn, gold & bitcoin can prosper pic.twitter.com/12pc1kS6n1

Other Strong Spots for Bitcoin

Bitcoin’s intraday price boom also follows a string of currency-related updates in the global markets. Argentine Pesos, for instance, is now under state-imposed capital control like yuan, preventing Argentines from withdrawing or exchanging from excessive amounts of local currency for foreign assets.

Across the Atlantic Ocean, the United Kingdom is also looking at a dwindling national currency driven by the fears of a no-deal Brexit. The UK Pound on Tuesday fell to its lowest level against the US dollar since 2017 – by 0.62 percent early London morning to $1.1991. It also dropped 0.21 percent against euro to €1.0975.

Currency investors are most likely to hedge into perceived safe-haven assets, which might put them on the path towards bitcoin. That is – at least – what the bulls believe. On the other hand, skeptics, including Euro Pacific Capital CEO Peter Schiff, thinks speculators are driving the cryptocurrency’s prices up.

As trade tensions rise and the yuan falls, Bitcoin is trading back above 10K. But don’t believe the hype that this rise reflects safe haven buying, similar to gold. Bitcoin is not being bought by investors searching for safe havens, but by speculators betting that they are!