The price of Bitcoin (BTC/USD) spiked on Friday to extend the current weekly gains by more than $900. The pioneer cryptocurrency rallied to top $8,500 in the process setting up a new weekly high of $8,549.

The price of bitcoin has been on a bullish movement since the start of last week and ended Friday closer to last week’s highs. Cryptocurrency prices plunged last week with bitcoin falling by more than $1,300 early in the week, but this week has been all about recovery.

The cryptocurrency industry relies a lot on the general market sentiment towards cryptocurrencies. Bitcoin is often among the biggest beneficiaries when the tide turns positive.

This week, social media giant Facebook launched GlobalCoin, which was well backed by top financial services companies. PayPal, Visa, and Uber are among the first top tier backers reported and this increases positivity towards cryptocurrencies in general.

Previously, Nike has also expressed its interest in cryptocurrencies with plans to launch its own crypto. Furthermore, positivity returned to the US markets this week after last week’s poor showing in the non-Farm Payrolls. 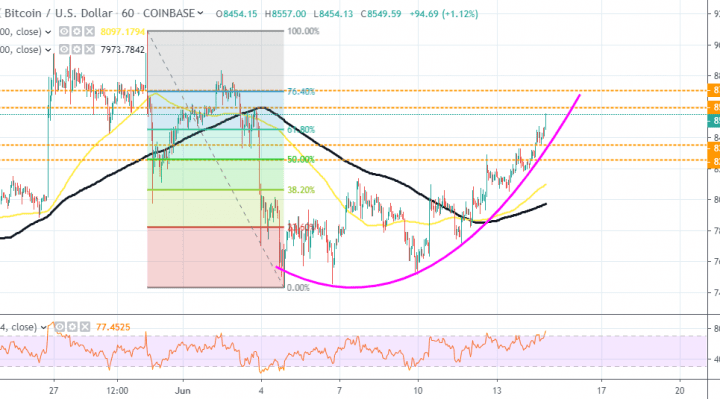 From a technical perspective, the price of Bitcoin appears to be on a major bull-run that started early this week. The (BTC/USD) price is now closing on 100% recovery from last week’s losses and the 76.40% Fib level creates a good target for the bulls.

While the bulls look to target profits at $8,593 short-term, and $8,707 intermediate, the bears will be hoping for another pullback towards $8,354 short-term and $8,257 in the intermediate time frame. The price of bitcoin also appears to have hit the overbought zone in the 60-min chart and this could trigger a pullback. 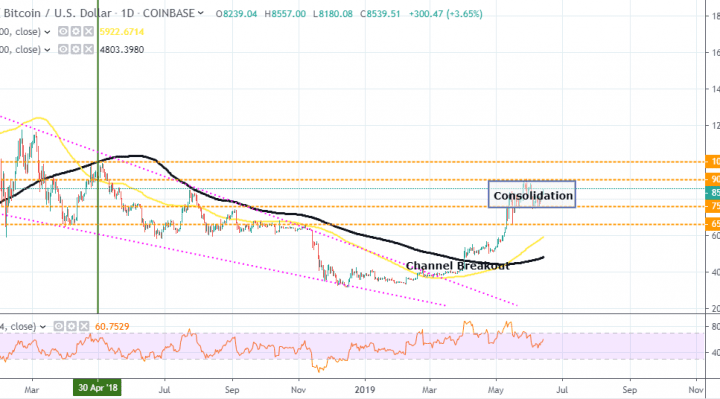 In the daily chart, the view is clearer. The (BTC/USD) bitcoin appears to be trading within a tight range ($7,580-$9,033). This indicates that Bitcoin could be consolidating towards a potential breakout following its rally between mid-April and mid-May.

Since mid-May, the price of Bitcoin has been restricted to a sideways movement, which indicates a strong battle between the bulls and the bears. Going into next week, buyers will be targeting $9,033 for long-term profits while the sellers will target $7,580 long-term.

In summary, the price of bitcoin appears to enjoy a long-term bullish bias, but the current consolidation pattern could end with a breakout that could change that.