The price of Bitcoin (BTC/USD) made a late rebound on Thursday afternoon (US session) after extending the current weekly losses to trade at about $9,487. The BTC/USD has been on a downward movement for the most part of this week, which counters last week’s impressive gains.

The current decline comes following a week that has seen a fair share of positive economic data in the US, which again is the exact opposite to the events of last week that triggered a major rally in cryptocurrency prices.

From a fundamental perspective, the price of the pioneer cryptocurrency is trading at the back of a positive week. This week, we witnessed the release of the US Consumer Price Index for July, which beat expectations on all counts, Retail Sales ex-Auto, as did the Initial Jobless Claims, and nonfarm Productivity data.

This sparked the return of positive sentiment to the US capital markets, which rallies stock prices. Bitcoin price suffered because of this since it has now become a contender for safe-haven investing due to its detachment from the mainstream financial markets.

This week’s economic data counters last week’s events that saw the US President Donald Trump announced 10% trade tariffs on $300 billion worth of Chinese goods, which was met with negativity as the market feared reactionary move by China. The impact of this news was compounded by the Fed’s 25 basis points rate cut, which sent shockwaves across markets. 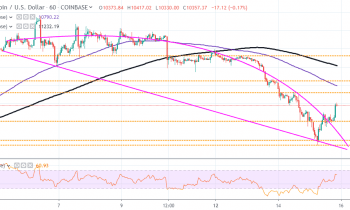 From a technical viewpoint, the price of bitcoin (BTC/USD) appears to have recently broken out of a descending cone=shaped pattern. This could lead to a major reversal in the current trend, which will be exciting to the bulls. 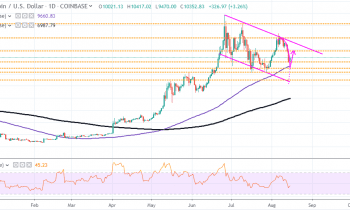 In the daily chart, the BTC/USD (Bitcoin) appears to be still experiencing strong bearish pressure as it continues to trade within a highly volatile descending channel. In the RSI Indicator, the BTC/USD is still within the normal trading zone which suggests a continuation of the current trend.

In summary, the price of bitcoin appears to be becoming highly volatile in recent trading sessions. However, from a broader perspective, the bears still retain control against the battling bulls.