BTC/USD (Bitcoin) Pulls Back After Extending Weekly Gains Above $10,660

The price of Bitcoin (BTC/USD) on Friday pulled back in the late trading session after rallying over the last two days to top $10,660. His is the highest trading price that the pioneer cryptocurrency has reached since July 22.

The latest rebound comes after a major series of events unfolded during the week. It marked a huge reversal in the price of bitcoin having traded on a downward trend for the better part of the previous two weeks.

From a fundamental perspective, the price of bitcoin is trading at the back of a major announcement by US President Donald Trump. Trump announced that the US will impose 10% trade tariffs on $300 billion worth of Chinese goods. Traders now fear that China will respond in kind thereby sending shockwave in the global economy.

Another announcement made during the week was by the US Federal Reserve, which cut the base interest rate by 25 basis points on Wednesday, again to signal some fractures in the US economic growth.

Surprisingly, these decisions along with inline nonfarm payrolls (164K, 3.7% unemployment rate) appear to have favored the price of bitcoin, which has made significant gains over the last two days.

This comes despite a flurry of cryptocurrency-related news that highlight various governments warning about the dangers of the cryptocurrency market. 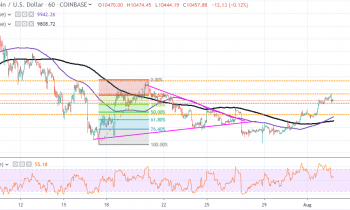 From a technical viewpoint, the price of bitcoin continues to trade in an upward trending movement after the latest rebound. This rebound pushed it to hit overbought levels, but the pullback has set it back inside the normal trading zone in the RSI indicator (60-min chart). 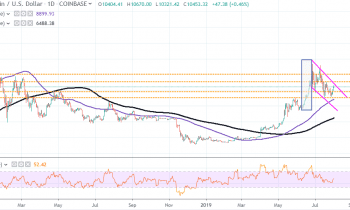 In the daily chart, the price of bitcoin appears to be still experiencing a bearish bias after an extended period of gains. It is currently trading within a descending channel, which indicates a bearish bias.

The bulls will target long-term profits at around $11,123 while the bears will be looking to pounce by targeting profits at $9,860.

In summary, the price of Bitcoin has recently become very volatile, which illustrates a strong battle between the bulls and the bears. And for now, the bears appear to be winning the war.