BTC/USD (Bitcoin) Rallies To Trim Weekly Losses After US NFPs

The price of Bitcoin (BTC/USD) rallied on Friday to add to Thursday’s gains and this helped the pioneer crypto to cut weekly losses by more than 50%. Bitcoin rallied to trade at $8,105 in the afternoon (US session) up from $7,429, the weekly low it reached on Tuesday.

The price fo bitcoin remains relatively bearish when you look at the performance over the last two weeks. Bitcoin hit a new multi-month high of $9,090 on May 30 but has since continued to drop albeit with a series of rebounds.

From a fundamental perspective, Bitcoin appears to be enjoying a rare bullish run in recent times following weak NFP data. The US labor market managed to add only 75,000 jobs in last month, which is a significant drop from 224,000 added in April. These numbers also missed analyst expectations of about 185,000 jobs and this affected the US markets.

And with Bitcoin recently being touted as a potential safe haven for investors, it looks like some of the stock market investors helped rally the pioneer cryptocurrency. Bitcoin has also gained from reports that the likes of Facebook and Nike are launching their own cryptocurrencies. 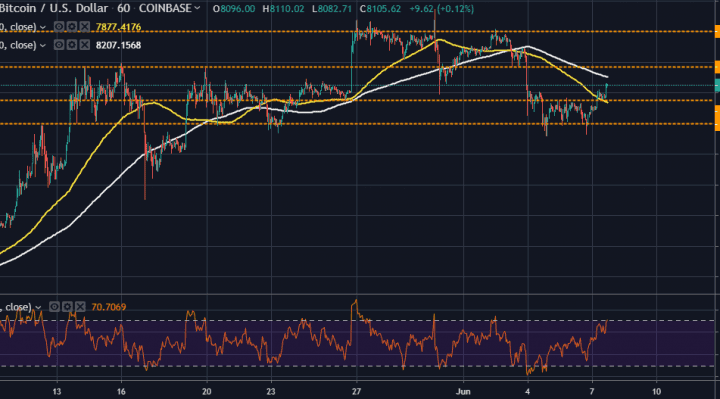 In the daily chart, the price of Bitcoin (BTC/USD) appears to be making a significant pullback from what has been a huge bullish run. This pullback pushed Bitcoin towards the key support level of about $7,500 but the general trajectory remains bullish.

As such, given the current level, the bears will target intermediate profits at $7,500 while the bulls will be looking high up at around $8,932 for inspiration.

In summary, the price of Bitcoin is on a major pullback, which is the first of its kind since the current bull-run began in April. This could suggest that some bulls are taking profits, but with the US NFP data missing expectations, there is still hope for the bulls.