New Oriental Education & Tech Grp (NYSE: EDU) posted decent earnings for the second quarter of FY 20. The company continues to upgrade the online-merge-offline standardized classroom teaching system, while the interactive courseware in the POP Kids program was rolled out to more cities. The company also continues to make strategic investments into the dual-teacher model classes, as well as new initiatives in K-12 tutoring, pure online education platform Koolearn.com to use the advanced teaching resources in low tier cities and mostly remote areas. The company has reported the Non-GAAP net income attributable to New Oriental for the quarter of $57 million, which represents a 147.8% increase from the same period of prior fiscal year. As of the November 30, 2019, EDU had cash and cash equivalents of $1,047.6 million as compared to $1,414.2 million as May 31, 2019. 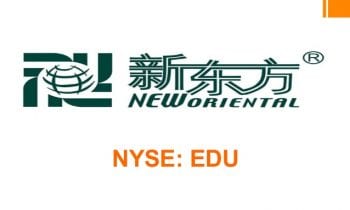 EDU in the second quarter of FY 20 has reported the adjusted earnings per share of 36 cents, while the adjusted revenue growth of 31.5 percent to $785.21 million in the second quarter of FY 20. During this quarter, the company has posted non-GAAP operating income of $36.5 million, compared to a loss of $14.9 million in the same period of last year. Non-GAAP operating margin expanded by 720 basis points to 4.7%, from negative 2.5% a year ago. The continued margin expansion is mainly on the back of better leverage in classroom rental and related operating expenses

Net revenues from educational programs and services for the second quarter grew 33% to $723.3 million, year-over-year. The growth was mainly due to an increase in student enrollments in K-12 after-school tutoring courses, which continued its strong momentum and achieved a year-over-year revenue growth of approximately 46% in dollar terms or 49% if computed in RMB. During the second quarter, the company has added another 41 learning centers in existing cities, opened a new training school in the city of Huizhou and the dual-teacher model school in the city of Chengde. By the end of this quarter, the total square meters of classroom area grew by approximately 25% year-over-year, and 6% quarter-over-quarter. Total student enrollments in academic subjects tutoring and test prep courses in the second fiscal quarter of 2020 grew by 63.3% a year-over-year to approximately 3,789,200.