The Ethereum has managed to rebound in the last days and to recover after the last massive drop. It remains to see what will really happen in the upcoming days because the Crypto could drop again to test and retest some support levels before will really start a larger increase.

The Crypto seems exhausted right now again and could slip lower in the upcoming days. Personally, I believe that the Ether and the Bitcoin have reached the bottom and now are expected to increase on the short to the medium term.

It remains to see what will really happen because the crypto market crashed after the regulation talks and after many negative talks.

Technically, the Ethereum was expected to drop on the short term after the impressive rally, maybe not so heavy and not so deeper, but now is important that has found a temporary support and could give birth to another significant upside momentum soon.

The rate could move sideways on the short term because it needs to recapture more bullish energy, it could come back down towards the 700 psychological level. 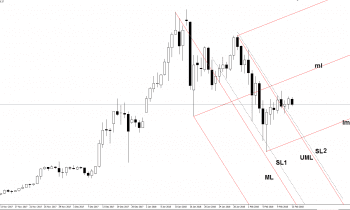 The rate has finally managed to escape from the descending pitchfork’s body and now is somehow expected to climb at least till the median line (ml) of the ascending pitchfork. Price failed to reach the mentioned dynamic resistance in the first attempt, but it could climb towards this level after a minor drop.