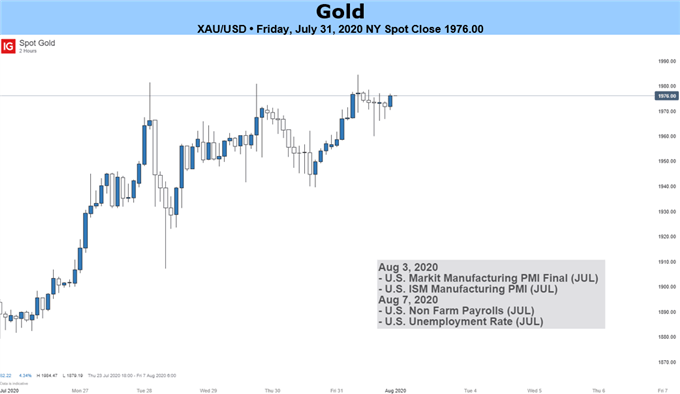 Gold just printed a fresh all-time high earlier this week before it backed off the fraction as the united states real yields plunged further into the negative zone. The most recent 10-year data indicate that the yields of the US are almost -1.0% down from the previous +0.6% in mid-March with the Fed continuing to pump US Dollars into the current system. The US and Gold real yields have a very strong negative correlation and this still holds.

Political uncertainty is still a key factor of the bullion’s multi-month rally and this is highly likely to remain the same until November when the US presidential elections will be held. This will without a doubt happen unless president trump delays the election as he indicated in a tweet back on Thursday. Although this is highly unlikely, it adds more uncertainty in what analysts are calling one of the most volatile US election timelines. Furthermore, and a major point of concern, the USA-China relations continue breaking this down further and this also applies to the developing USA stock markets, which will most likely underpin the sell-off in the bullion.

The daily chart shows the bullion market becomes quite stretched by last week. The CCI indicator showed the market in a very extreme oversold zone. The setup has now started to ease and although gold remains above $1,906/oz., Tuesday’s low prints and Fridays high – the outlook remains highly optimistic.

The prices of gold ended lower on Thursday with the gold retreating from the record rally that had seen the gold experience 9 consecutive days of great gains.

Essentially, the precious metal found more support on Wednesday after the federal reserve signaled it was planning to retain the low-interest rate setting for the next few months as the economy of the united states recovers from the coronavirus pandemic.

Nevertheless, some analysts have stated that the prices of gold might be getting into a period of further consolidation after the historic run-up that has been somehow necessitated by the public health crisis. The weakening US Dollar has also prompted this. Also, a great measure of the USD, the ICE USD index DXY, +0.46% hangs around the lowest level in the past 2 years and the yield for the ten years.

As expected, gold has managed to reach the record highs close to $2000 per ounce. Also, silver reached a new high close to $26 per ounce. However, these prices were because of the sharp correction.

Overall, silver and gold failed to improve after the US released more data relating to the economy’s GDP and unemployment claims.