Snowflake Inc (NYSE:SNOW) stock rose 2.10% (As on Jan 12, 11:28:09 AM UTC-4, Source: Google Finance) after Barclays analyst Raimo Lenschow upgraded the stock from Equal-Weight to Overweight but lowered the target price to $367 from $393. The consensus target is $386.31. Further, Collibra, the Data Intelligence company, announced a new investment from Snowflake Ventures, the venture arm of Snowflake, the Data Cloud company. The investment will deepen the partnership and be used to drive product innovation, with initial focus expanding Collibra’s enterprise-wide policy enforcement capabilities and enhancing data lineage with Snowflake. 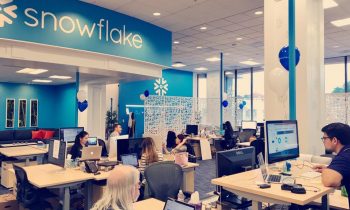 Snowflake’s recent execution has also been solid. Snowflake has been roughly doubling its product revenues year-over-year in recent quarters and expects product revenue growth of between 94% to 96% year-over-year for Q4 FY’22. Over the most recent quarter, Snowflake’s operating margin also turned positive, coming in at 3%, well ahead of guidance of -7%. Snowflake’s total customer base rose 52% year over year to 5,416 in Q3 and its customers also appear to be spending more, with the base of customers generating over $1 million in trailing-12-month product revenue, rising 128% from a year earlier. The longer-term outlook also looks good for Snowflake. The transition of businesses to more cost-effective and scalable cloud-based data warehousing from on-premise models is only likely to gather steam going forward. Snowflake is particularly well-positioned in this market, as its product works across cloud platforms such as Amazon’s AWS, Google Cloud, and Azure, and also offers more flexibility, as it separates storage from computing for the purpose of billing. The addressable market is also large, standing at over $80 billion, per Snowflake, giving the company plenty of room to expand.

Although the stock has declined a bit from all-time highs of about $392 seen in mid-November, partly due to the Federal Reserve’s increasingly hawkish stance and concerns of a new coronavirus strain, Snowflake still has a lot going in its favor. Over Q3 FY’22, the company grew revenue by around 110% year-over-year, beating estimates, while also providing stronger than expected guidance for the full year. The longer-term growth outlook also looks strong. Cloud-based data warehousing is clearly the future, as organizations transition from storing data on on-premise servers and costly hardware to cloud-based offerings that are more cost-effective and scalable. Snowflake is particularly well placed in the space, as its product works across cloud platforms and also offers more flexibility, as it separates storage from computing for the purpose of billing. The addressable market is also large, standing at over $80 billion, per Snowflake.