The South Korean won is extending its losses midweek after more economic data came out that put a spotlight on the vulnerability of the South Korean economy. The country had been concerned about the development of a second wave, but officials seem more worried about disappointing manufacturing, industrial, and trade numbers that could hamper Seoul’s post-coronavirus rebound.

South Korea’s exports fell at an annualized rate of 10.9% to $39.2 billion in June, worse than the median estimate of 7.8%. This represented the fourth consecutive month of tumbling exports, driven by a sharp decline in automobiles (-33.2) and petrochemicals (-33.2%). Automobile, biohealth, and food shipments spiked, but exports to the US, the European Union, and Japan slumped.

Imports also plummeted 11.4% year-on-year to $35.6 billion last month, coming in worse than the market forecast of 9.6%.

Overall, South Korea’s balance of trade surplus dropped to $3.67 billion in June, relatively unchanged from the same time a year ago.

The IHS Markit manufacturing purchasing managers’ index (PMI) rose to 43.4 in June, up from 41.3 in May – anything below 50 indicates a contraction. New orders, output, foreign demand, and employment continued to decline. Business sentiment remained negative because of the uncertainty surrounding COVID-19 and its impact on the global economy.

Analysts were stunned on Monday when a barrage of bearish figures for May was published. Industrial production slumped 6.7%, down from -1.4% in April. Manufacturing output plunged 9.8%, down from -5.1% in the previous month. Construction output slid 5.8%, down from 3.2% in April. 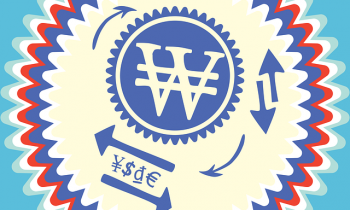 Retail sales surprised economists, advancing 4.6% in May, slightly down from the 5.3% jump in April.

Financial markets are paying attention to the latest reports that South Korean banks and holding companies are increasing sales of their riskiest bonds. In an environment where interest rates are at record lows, there is a huge demand for extra yield. Despite deteriorating balance sheet conditions, investors are scooping up these products, and this could be the medium-term trend with rates anticipated to remain lower for longer.

Last month, health authorities sounded the alarm about the possibility of a second wave following a holiday long weekend. However, confirmed cases of COVID-19 have remained relatively subdued, with the highest number occurring at the end of May with 79.