Truist Financial Corp (NYSE:TFC) stock fell 2.46% (As on Jan 19, 11:15:01 AM UTC-4, Source: Google Finance) though the company’s fourth-quarter profit rose even as a decline in net interest income weighed on revenue, while the bank said it sees as much as 4% growth in revenue depending on the number of Federal Reserve rate hikes, while it pledged to phase out overdraft fees over the next few months. Net interest income declined 3.7% to $3.27 billion, versus the Visible Alpha consensus of 17 analysts indicating $3.21 billion. Average loans fell 5.5%. The company said that net interest income was starting to improve, buoyed by strong credit quality. Noninterest income increased 1.7% to $2.32 billion on gains in its insurance, investment banking and card payment arms, the presentation showed. However, the headline figure fell just shy of the Visible Alpha consensus of $2.36 billion. The company’s results benefited from a $103 million reserve release for credit losses as the economic outlook continued to improve. The total EPS impact of the December 2019 merger between BB&T and SunTrust Banks to form Truist was $0.25 per share in the final quarter of 2021, Rogers said, expecting merger costs to halve in 2022 compared to 2021 and reduce to zero in 2023. 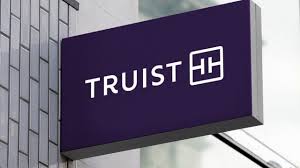 Meanwhile, the total revenue is expected to grow 2% to 4% in 2022 due to higher net interest income and growth in fees. The lower end of the guidance assume two Federal Reserve rate hikes this year, while the upper end reflects three to four, he said. The net charge-off ratio is seen between 30 and 40 basis points in 2022 given favorable economic conditions, compared to 0.25% of average loans and leases in the fourth quarter of 2021. Separately, Truist said it will discontinue overdraft protection and negative account balance over the next few months for all personal accounts after rolling out its Truist One Banking checking account this summer with no overdraft fees.