WTI crude oil is still in selloff mode and has tumbled down to a key support level visible on the long-term charts. Price is testing this area of interest and a break lower could expose the commodity to further declines.

A bounce, on the other hand, could keep it on track to recover to the nearby resistance levels. After all, the 100 SMA is still above the longer-term 200 SMA to indicate that the path of least resistance is to the upside. In other words, there might be a stronger chance for the uptrend to resume than to reverse. Then again, price has fallen below both moving averages as confirmation that bearish pressure is kicking into high gear.

RSI is already indicating oversold conditions, though, and turning higher could signal a return in bullish momentum. Stochastic is also in the oversold region to signal that sellers are tired and could let buyers take over. 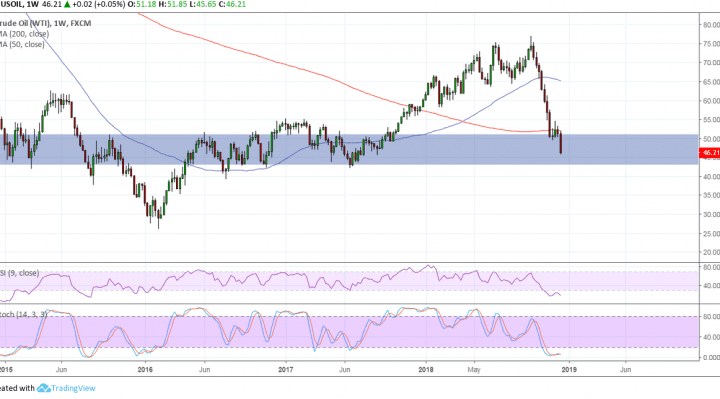 WTI crude oil continues to get hit on all sides as oversupply concerns weigh while expectations of weaker demand also loom. Although OPEC and other producers have committed to curb output starting next month, this might not be enough to arrest the downside momentum for the commodity.

To top it off, sustained expectations for Fed tightening next year are keeping recession fears in play. This comes as the US economy is seeing signs of a slowdown and investors are also pointing to the yield curve inversion as ominous of a prolonged economic contraction. Increasing borrowing costs then could threaten business investment and consumer spending, which would keep a lid on crude oil demand and price.

Looking ahead, the Baker Hughes oil rig counts should also provide a sense of how future US oil output might turn out. A negative read could ease oversupply concerns, at least in the short-term, while another gain could drag prices further south.