The WT Crude Oil has been trading on diving wedge since the start of the week, amid price correction. It now appears to be facing strong resistance around the $59.00 level which could be a good short-term target for the bulls.

From a fundamental perspective, the price of oil is trading at the back of a very busy week in the global markets. It all started with the attack of Saudi Arabian oil plants, which triggered a chain reaction.

First Trump threatened to impose new sanctions on Iran and this sent oil prices soaring to new four-month highs. Then later in the week, the US softened its stance on the issue to seek a peaceful resolution. This has contributed to the current pullback in oil prices.

OPEC and Russia had held off pumping more oil following the Saudi attacks and this also added to the pressure on oil supply which boosted oil prices. And then in midweek, the EIA report showed that Crude Oil stocks for the week ending Sep. 13, increased by 1.05M barrels. Analysts were expecting a decrease of 2.496M barrels.

More pressure on oil prices was added yesterday when the Federal Reserve failed to signal a clearer path on the way ahead after cutting rate for the second time this year. 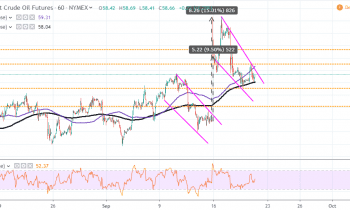 Technically, the WTI Crude Oil continues to cover the trade gap created at the start of the week as it trades in a bearish wedge. The Relative Strength Index indicator shows that the current corrective movement could continue through Friday given the current position within the normal trading zone. 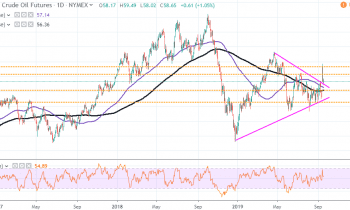 In the daily chart, the WTI Crude Oil appears to have recently broken out of a consolidative triangle pattern but is now on the way back within the support and resistance trendlines following the current pullback.

This creates several opportunities for traders going into Friday. The bulls will be targeting long-term profits at around $60.61 or higher at $62.63 while the bears will look to pounce at around $56/17 or lower at $53.16.

In summary, the price of WTI Crude Oil appears to be trading under short-term bearish pressure in an attempt to correct from the trade gap created at the start of the week. However, in the long-term, there is no clear winner yet between the bulls and the bears.