WTI Crude Oil Pulls Off $59.00 in a Consolidative Pattern Formation

The price of the WTI crude oil appears to be struggling for recovery following last week’s plunge. It failed to surge above $59.00 on Friday as the bearish pressure continued to take a toll. The light crude oil also appears to have found support off the 100-hour SMA. This has resulted in a consolidative pattern formation.

The price of oil is trading at a reasonable distance off the overbought levels, but the space below is far bigger. This suggests that a pullback is more likely in the coming days.

Since the US-Iran conflict subsided early last week, oil prices have continued to fall. This comes despite a positive EIA report published on Wednesday. The latest WTI Crude Oil Stocks change for last week showed that there was a decline of 2.549 million barrels. The market was expecting a decline of  0.474 million barrels. In the previous week, the report showed an increase of 1.164M.

Earlier in the week, the US API Weekly Crude Oil Stock edged higher to 1.1M barrels up from -5.945M in the week before. And on Friday, the Baker Hughes Oil rig count was up by 14 points to 673 versus 659 in the previous period. But the EIA Natural Gas storage change impressed with -109B versus -95B expected down from -44B in the previous week.

It looks like the oil prices are affected by this week’s disappointing economic data with both the UK and the US missing CPI expectations on several counts. The EU economic block only managed to match a few. 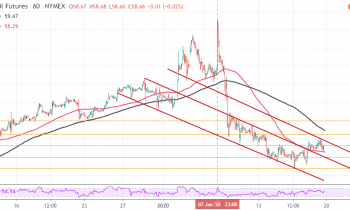 Technically, the price of the WTI Crude Oil appears to be trading under significant bearish pressure. This shows that the bears have taken control of the market in the short-term. There has been ana attempted recovery in the last few days but this also appears to have found strong resistance around the $59.00 level.

Therefore, the bears will be targeting short-term profits at around $58.00 or lower at $57.38. On the other hand, the bulls will hope that the oil price can breach resistance and surge towards $59.25 or higher at $60.00. 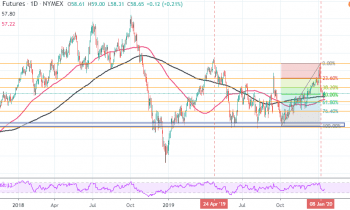 In the daily chart, the WTI Crude Oil appears to have experienced a massive plunge over the last two weeks. This has wiped nearly 50% of the gains made since October last year. The light crude oil has since pulled off overbought levels of the RSI indicator.