The price of WTI Crude Oil continued to consolidate within the $52.00 to $53.00 range on Friday as it converged in a triangle formation to trade at $52.50 per barrel. The Light Crude Oil has been trading within a tight range since the start of the month and this range appeared to tighten even further between Wednesday and Friday.

Both the 100-day and the 200-day moving average lines are literally banded together just to show how tight the price movement has become over the last few days. This signals a potential breakout going into next week.

The price of oil is trading at the back of what has been a politically-skewed week. Iran has been blamed on the attack on two oil tankers in the Gulf of Oman. This has sparked speculation on a potential US-Iran war, which could affect oil supply. Under general circumstances, low oil supply pushed Crude Oil price up.

And to add positivity to this bullish outlook on oil prices, the CFTC US Oil NC Net Positions came in at 351k down from 400k. This should be boosting oil prices.

However, with the global economy increasingly showing signs of a slowdown, there is fear that a recession could be around the corner. This usually affects oil prices, which is why the price of Crude Oil continues to consolidate even tighter as the market forces balance out. 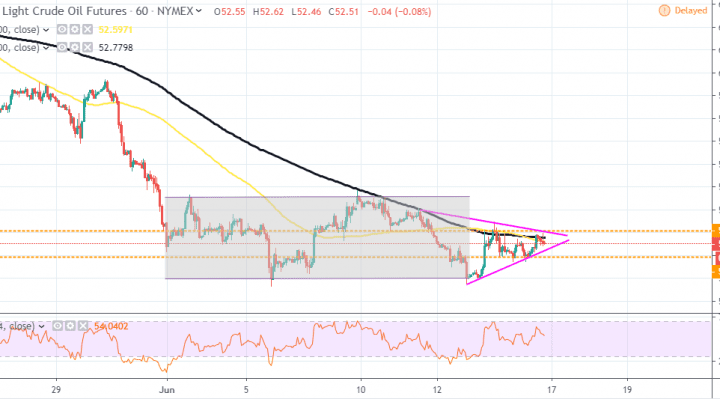 Technically, the WTI Crude Oil appears to well poised for a major breakout. The triangle formation at the end of the sideways channel indicates that the consolidation in nearly over. However, opportunities are still limited in the short-term.

The bulls will be targeting profits at around $53.07 from the current price level of $52.51. On the other hand, the bears will look to pounce on any pullbacks towards $51.93. 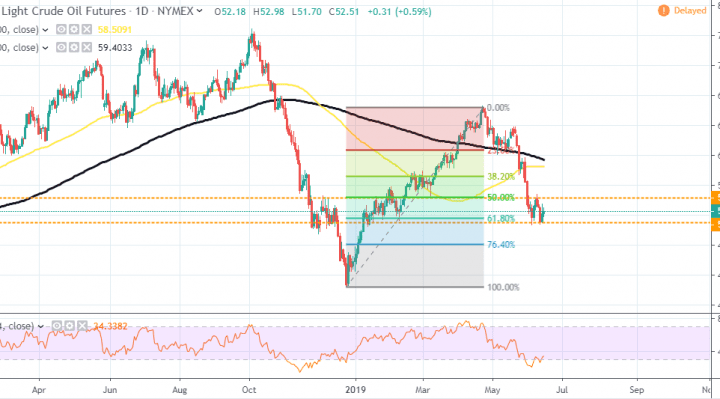 In the daily chart, the price of oil appears to be consolidating at a key Fib retracement zone (50% to 61.8%). This comes following a major pullback that started towards the end of April this year.

The pullback has also effectively erased most of the gains made this year as the WTI Crude Oil rallied to recover from Q4 2018 losses. The bulls will target intermediate profits at $54.28 while the bears will be looking at $51.00.

In summary, the price of WTI Crude Oil appears to be on a way back down after failing to make full recovery. Nonetheless, the current consolidative pattern formation could trigger a major breakout.