AUDNZD has formed higher highs and higher lows inside an ascending channel on the 1-hour time frame and could be due for a correction to the bottom. Applying the Fibonacci retracement tool shows the potential support areas.

The 61.8% level is closest to the channel support around 1.0760 while the 38.2% level lines up with the mid-channel area of interest at 1.0800. If any of these levels keep losses in check, price could resume the climb to the swing high around 1.0860 or the channel top.

RSI is still heading down, though, so there is some selling pressure in play. However, the oscillator is also nearing oversold conditions to reflect bearish exhaustion. Stochastic is pointing down to suggest that sellers might be tired and willing to let buyers take over as well. 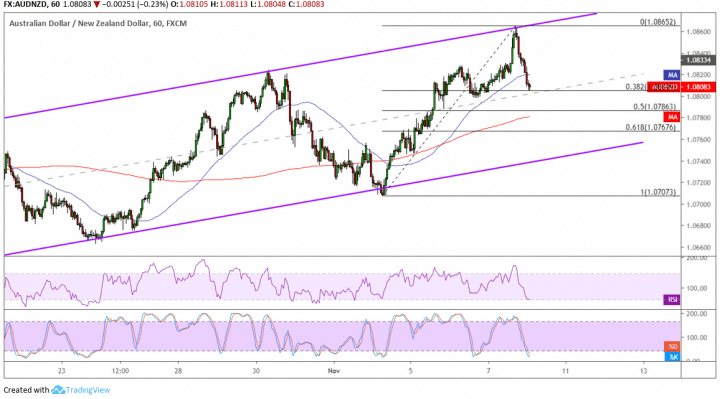 Meanwhile, the Kiwi previously took some hits from weaker than expected jobs data. The unemployment rate increased from 3.9% to 4.2% for Q3 even as the employment change reading came in line with expectations of a 0.2% uptick.

Earlier today, the RBA released its monetary policy statement and signaled that the Australian economy is starting to pull out of a soft patch and that the labor market has been resilient. However, the central bank also pointed out that trade tensions have brought about a lot of domestic uncertainties.

There are no other major reports due from both Australia and New Zealand in the next sessions, so price action could hinge mostly on risk-taking.