Bitcoin recently broke above its short-term descending trend line to indicate that a reversal is underway. However, bulls barely gained any traction before price quickly slumped back to the broken resistance.

This could be a short-term pullback from the breakout move to gather more bullish energy before the uptrend resumes. Applying the Fib extension tool shows the potential upside targets if the resistance turned support holds.

Stochastic is turning south from overbought levels, though, so there may still be a pickup in selling pressure. In that case, bitcoin could slump below the latest lows around $6500 and continue the drop.

The 100 SMA is below the longer-term 200 SMA after all, so the path of least resistance is to the downside. In other words, the selloff is more likely to resume than to reverse. Price has also moved back below the moving averages to confirm that selling pressure is present.

However, RSI is on the move up to show that bulls still have a fighting chance at pushing bitcoin price up to the nearby resistance levels and beyond. 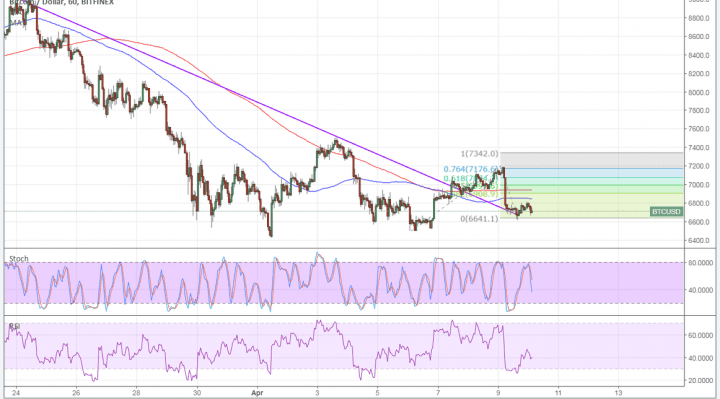 Analysts say that the recent slump in bitcoin price is simply due to the looming tax deadline, prompting a bout of profit-taking as investors crunch the numbers on their portfolios. This suggests that the drop might just be temporary and stronger fundamentals could revive gains later on.

Keep in mind that several top hedge funds are starting to invest in the cryptocurrency space, representing a nod of approval from those who previously had negative things to say about bitcoin. One of which is George Soros who previously said that bitcoin is in a bubble.

The dollar is still under some selling pressure anyway due to the ongoing trade clash between the US and China. Further tariff increases could keep investors on edge and hesitant to put funds in US assets, including the dollar, which might be bullish for BTC/USD.