Bitcoin broke above its short-term symmetrical triangle and is now testing the channel resistance. A break above this could send it up to the next area of interest at the longer-term descending triangle top and $10,000 major psychological level.

The 100 SMA is below the longer-term 200 SMA, though, so the path of least resistance is still to the downside. In other words, there’s a chance that the selloff could resume and price could test the triangle bottom at $6,500.

However, it’s also worth noting that price is trying to break past the 200 SMA dynamic inflection point that lines up with the top of its ascending channel. The $10,000 mark is an area of interest where limit orders are likely located.

Stochastic is moving up to show that buyers are in control of the game and could take bitcoin up to the next upside barriers. This oscillator is approaching overbought levels to reflect exhaustion among buyers. RSI is already in the overbought region to signal that bears are ready to take over. 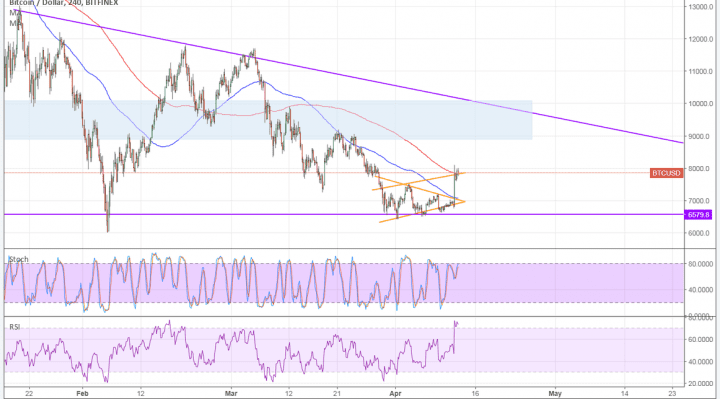 Bitcoin price slumped hard earlier this week on the looming tax filing deadline, but now that most of the profit-taking activity is done, the cryptocurrency is trading back on fundamentals and sentiment. Fortunately for bulls, risk appetite was evident in recent trading sessions on cooling geopolitical tensions.

The latest batch of headlines have mostly been positive for cryptocurrencies, with many highlighting how big investor families are investing in the industry. In particular, Soros Fund Management reportedly secured internal approval to start betting on virtual currencies, representing a shift from Soros’ earlier statement that bitcoin is in a bubble.