Bitcoin made a strong surge past the $8000 major psychological level late last week to signal that bulls are back in the game. Price is still inside its ascending trend channel on the 1-hour time frame and could be due for a pullback from its climb.

Applying the Fibonacci retracement tool on the latest swing low and high shows that the 61.8% correction level lines up with the channel support around $7400. This is also close to the 200 SMA dynamic support, which might be the line in the sand for this pullback. The 100 SMA is above the 38.2% Fib around $8000.

Speaking of moving averages, the 100 SMA is safely above the longer-term 200 SMA to signal that the path of least resistance is to the upside. In other words, the uptrend is more likely to resume than to reverse. Also, the gap between the moving averages is widening to reflect stronger bullish momentum.

Stochastic is pointing down to indicate that sellers have the upper hand while buyers take a break. This oscillator is dipping close to oversold levels to signal that selling pressure is almost exhausted and buyers could return soon.

RSI has a bit more room to fall so the correction could go for a bit longer. The 38.2% Fib also lines up with the mid-channel area of interest, adding to its strength as potential support. If any of the correction levels keep losses at bay, bitcoin could resume the climb to the swing high or the channel resistance closer to $9000. 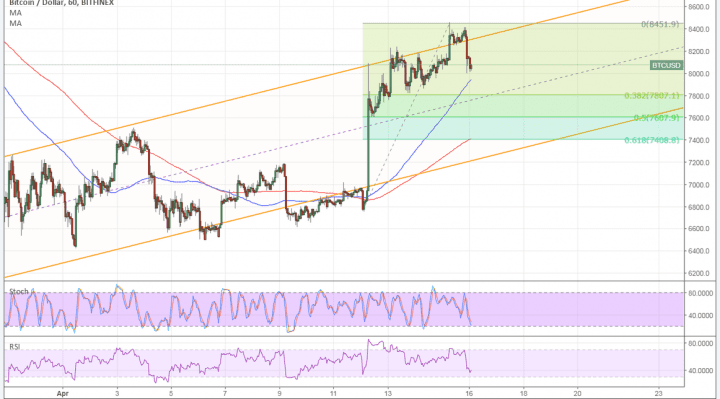 The recent surge in bitcoin is being attributed to traders anticipating an influx of funds after the tax deadline passes this week. Note that big hedge fund families are reported to be gearing up to place bets in the industry, something that has revived confidence among investors.

Besides, geopolitical risk appears to be weighing on the dollar instead of boosting it as a safe-haven, possibly allowing non-traditional assets like bitcoin to take the lead.