Bitcoin had been trading inside a descending trend line on its daily time frame and it looks like it just broke higher. This could signal that a longer-term uptrend is underway, but some technical indicators are showing otherwise.

For one, the 100 SMA is crossing below the longer-term 200 SMA to reflect weakening bullish pressure. This could still be enough to push bitcoin back inside the triangle consolidation pattern or lower. Further rallies could also find resistance at these dynamic inflection points.

Stochastic is already indicating overbought conditions, which means that buyers are already exhausted from the latest rally. RSI has some room to climb, though, so buyers could stay in control for a bit longer. Then again, a quick pullback to the broken triangle resistance around $7000 is still a possibility.

Note that the chart pattern spans $6,000 to $19,000 so the resulting rally could be of the same height. Keep in mind also that Q2 tends to be very positive for bitcoin, so it won’t be surprising that traders try to cash in on this self-fulfilling tendency. 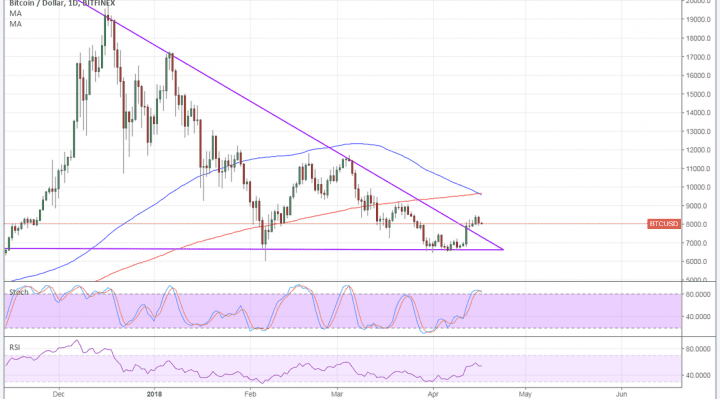 Sentiment in the industry is on the up and up again after it was reported that Coinbase acquired Earn.com for more than $100 million. This represents growth in the space and room for more mergers and further industry developments.

Earn.com was formerly known as 21 Inc, a bitcoin mining operation. After rebranding, the firm is now a social media platform that allows users to get incentives in the form of cryptocurrency rewards for completing tasks.

Prior to this, the news of Soros Fund Management prepping to make bets in the industry was also seen as a big plus for bitcoin and its peers. Apart from reflecting a shift in George Soros’ earlier statement that bitcoin is in a bubble, this also led analysts to dig up data on how other large hedge fund families are making investments in the cryptocurrency industry.