Bitcoin is establishing a new uptrend as it moves inside an ascending channel on the 1-hour time frame. Price bounced off support and looks ready for a move to the top as it tests the mid-channel area of interest.

A break past the $8300 level could take bitcoin up to the next ceiling around $8500-8600. The 100 SMA is above the longer-term 200 SMA to confirm that the path of least resistance is to the upside or that the uptrend is more likely to continue than to reverse. The 100 SMA appears to be holding as dynamic support as well.

However, stochastic is indicating overbought conditions and is turning lower to reflect a potential return in selling pressure. This could take bitcoin back down to the channel support around the $8000 major psychological level or the 200 SMA dynamic support at $7800. RSI is still on the move up to reflect some buying momentum but is also nearing overbought conditions to signal exhaustion. 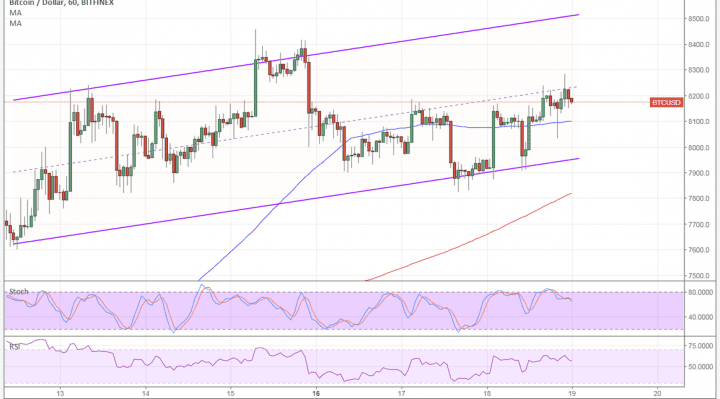 The dollar has been supported across the board in recent trading sessions but cryptocurrencies are putting up a fight now that the tax filing deadline has passed. A lot of profit-taking was seen prior to this date as investors crunched the numbers on their profits and dues, but investors appear to be reestablishing their positions from now on.

After all, Q2 has proven to be a positive quarter for bitcoin and altcoins. There have been fresh developments in the industry to sustain this improved sentiment, which is seen to have started when news of George Soros shifting his stance on cryptocurrencies broke out. Regulatory concerns are still present but appear to be in the backseat for now.

Keep in mind, however, that revived tightening prospects for the US central bank continue to boost the dollar while bond yields are rising. Then again, persistent geopolitical risks could undo these rallies and lend support for non-traditional assets like bitcoin.