Bitcoin is gaining traction since its upside break from the descending triangle on its daily time frame. This chart pattern spans $6,000 to $20,000 so the resulting rally could be of the same height.

However, price has yet to clear the nearby inflection points at the moving averages around the $10,000 major psychological mark and key area of interest. Also note that the 100 SMA crossed below the longer-term 200 SMA to signal that the path of least resistance is to the downside. In other words, there’s still a good chance that sellers could return at some point.

Besides, stochastic is already indicating overbought conditions or that buyers are exhausted and about to book profits. Turning lower could draw sellers in and lead to a pullback to the broken triangle resistance around $7000-8000. 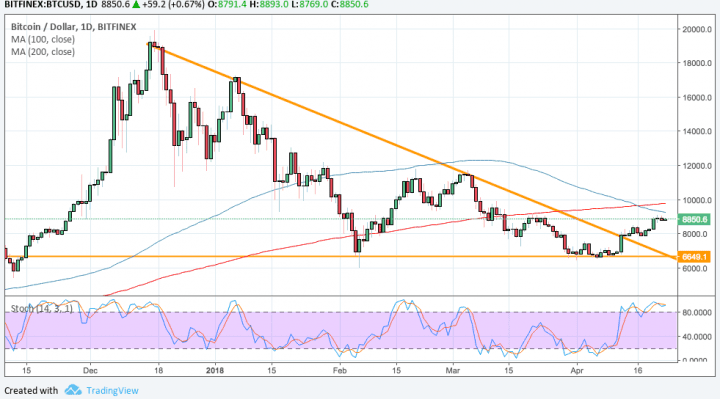 Sentiment in the industry has been improving over the past couple of weeks, as it was reported that hedge funds are prepping to place bets on cryptocurrencies and that companies like Coinbase are making acquisitions. The bullish run was also supported by reports on a rising number of buy orders being placed, along with easing concerns on regulation.

Also note that Q2 is historically positive for bitcoin and its peers, and the end of the tax season is drawing investors to reopen their positions once more. Risk appetite has been generally present in the financial markets as well on cooling geopolitical risks.

Looking ahead, sentiment could continue to push bitcoin price around for the next few days and determine whether or not the break is a fakeout or not. A move back below the triangle resistance could confirm that sellers are still putting up a strong fight and could even push for a downside break instead.