Bitcoin has formed a double bottom reversal formation on its daily time frame to signal that a longer-term uptrend is due. Price has yet to test and break past the neckline around $12,000, though.

The reversal formation is approximately $6,000 tall so the resulting rally could be of the same height, taking bitcoin to $18,000 or even for a test of the record highs at $20,000.

However, the 100 SMA just crossed below the longer-term 200 SMA to signal that the path of least resistance is to the downside. This suggests that the selloff is more likely to continue than to reverse. For now, the moving averages are holding as dynamic inflection points as well.

Stochastic is indicating overbought conditions, which means that buyers are exhausted. Turning lower could draw sellers back in and lead bitcoin to move south, possibly for another test of the lows around $6,000-6,500. 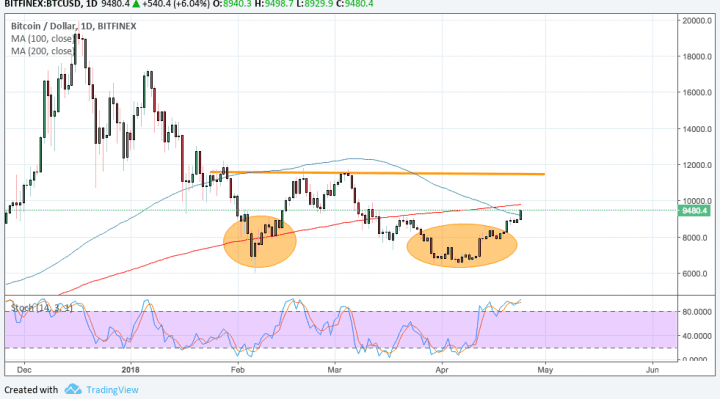 Risk appetite has taken a hit in financial markets on resurfacing geopolitical concerns, but bitcoin has managed to hold on to its recent gains. This indicates that the cryptocurrency is being driven by strong market fundamentals, especially since developments have been mostly positive recently.

After the end of the tax season, traders are seen to be reopening positions and the pickup in bullish momentum has led to even more buying pressure on breaks of technical levels. News reports have also been mostly positive, with acquisitions, new listings, and surging volumes being reported.

The dollar has retained some support, though, as traders continue to price in more rate hikes this year and bond yields have been on the rise. A strong return in risk-off flows could force bitcoin to return its recent wins to the safe-haven dollar while a continuation of risk-taking could sustain the rallies.

Analysts are predicting that bitcoin could surpass its highs this quarter, which has historically proven to be a positive one for cryptocurrencies.