Bitcoin is keeping its head above the long-term floor visible on the 4-hour and daily charts. In addition, a small reversal formation can be seen, suggesting that further gains are underway.

In particular, price is forming an inverse head and shoulders just above the $5,800 floor and could be ready for a neckline test soon. A break higher could lead to a climb to the next horizontal barrier around $6,800. However, the 100 SMA is still below the longer-term 200 SMA on this chart to signal that bearish momentum is present.

The 100 SMA is also holding as dynamic resistance for the time being. If it keeps doing so, bitcoin could find itself falling back to test the long-term floor or even attempting to break lower. A break past this level and the neckline could lead to a rally of around $800 or the same height as the reversal pattern.

RSI is heading higher to signal that buyers have some energy left in them to push for more gains. However, the oscillator is nearing overbought levels and could be due to turn lower soon, reflecting a return in selling pressure. Stochastic is already heading down without even hitting overbought levels, which suggests that selling pressure is back. 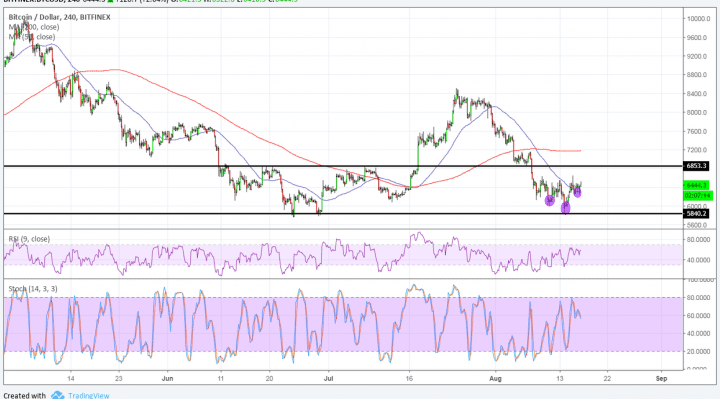 Bitcoin has been dragged lower by a number of factors earlier in the week, so many are saying that the recent bounce is merely a short squeeze or profit-taking. Then again, an improvement in market sentiment could be noted after the US and China confirmed that trade talks will resume next week. This could remove uncertainty in businesses and financial markets, leading investors to put funds back in riskier assets like bitcoin.

Others also point to the bitcoin futures contracts expiring on August 15 and how the market typically sees a strong rally afterwards. For now, traders could hold tight until bigger catalysts are seen, specifically any word on the bitcoin ETF applications with the SEC.