Bitcoin has formed higher lows and found resistance near $6,600 to create an ascending triangle on its 4-hour time frame. Price is nearing the peak of the triangle, so a breakout might happen anytime soon.

A candle closing below the $6,400 level could be enough to confirm that sellers are back, possibly taking price down by the same height as the triangle. The formation spans $5,900 to $6,500 so the resulting move could be at least $600 tall.

RSI also seems to be pointing down even without hitting overbought levels. This suggests that sellers are eager to take control and push price lower. However, stochastic is turning up without hitting oversold conditions, so buyers may be putting up a fight as well. 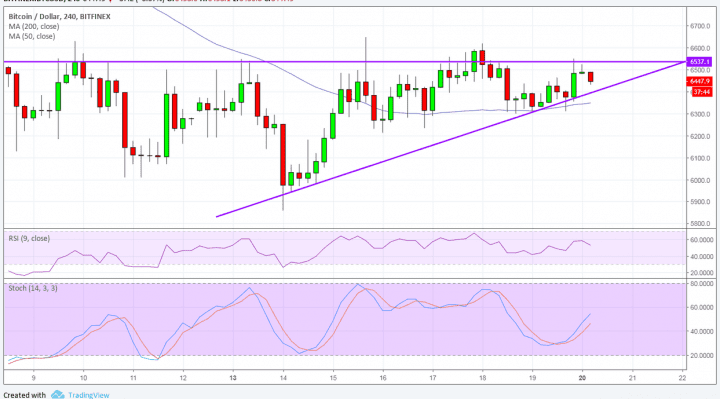 Traders could be holding out for the next set of industry developments before taking bitcoin in a particular direction. It looks like they’d have to wait until the SEC decision on the bitcoin ETF applications, which they pushed back towards the end of September.

Approval could bring strong gains for cryptocurrencies as this would be a nod of approval to these types of products and lead to more applications in the future. It could also usher in stronger volumes and more activity, which is usually bullish for prices. On the other hand, denial could mean another wave lower for bitcoin and its peers.

It’s interesting to note, however, that buyers continue to defend long-term support zones, suggesting that these are likely to hold unless there’s a strong enough catalyst to spur a breakdown.