Bitcoin might be gearing up for a longer-term climb as it failed in its last two attempts to break below $5,800, creating a double bottom on the 4-hour chart. Price has a long way to go before testing the neckline at $8,400 and would need to break higher to confirm an uptrend.

The 100 SMA is below the longer-term 200 SMA to indicate that the path of least resistance is to the downside. In other words, the selloff is more likely to resume than to reverse. The 100 SMA also seems to be holding as dynamic resistance at the moment.

However, price has been forming higher lows as of late, trading inside an ascending channel visible on short-term charts. Price is currently testing support and another bounce could give it more bullish traction to test the 200 SMA dynamic inflection point. A move past that level could take bitcoin to the neckline next. 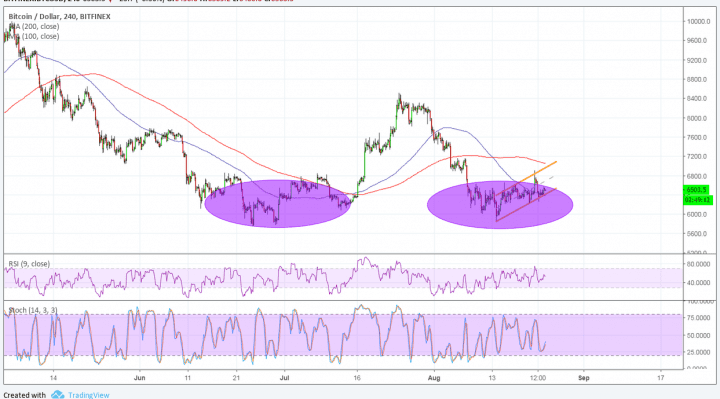 RSI is pointing back up halfway through on its move down, indicating that buyers are trying to regain the upper hand. Stochastic has also pulled up without even reaching oversold levels to show that buyers are eager to return.

Bitcoin may have suffered a sharp dip on news of the SEC bitcoin ETF rejections but is gaining some support now after the regulator shared plans to review this decision. This could pave the way for another comment period or possible revisions that could later on gain approval. This also keeps traders optimistic that the next set of bitcoin ETF applications waiting for their ruling next month might see approval.

According to the SEC order, the rejection was on the grounds of the potential for price manipulation and fraud in markets tied to the security. The commissioners voted 3-1 to reject the applications by ProShares and a couple of other companies, but Republican commissioner Hester Peirce dissented on the basis she felt doing so stifled innovation.