Bitcoin could be in for a deeper pullback from here, but might aim for these upside targets if the area of interest holds. Price has yet to show signs of bullish traction and might need to test the rising trend line support around $7,000 where buyers are waiting.

The 100 SMA is still above the longer-term 200 SMA to indicate that the path of least resistance is to the upside. This means that the uptrend is more likely to resume than to reverse.

Price has fallen below the 100 SMA dynamic inflection point to signal some selling pressure but might be due for a test of the 200 SMA next. The gap between the moving averages is widening to signal that bullish momentum is getting stronger.

RSI has made it to oversold territory to reflect exhaustion among sellers and turning higher could allow buyers to regain control. Similarly stochastic is indicating oversold conditions and is starting to move up so bitcoin might follow suit. 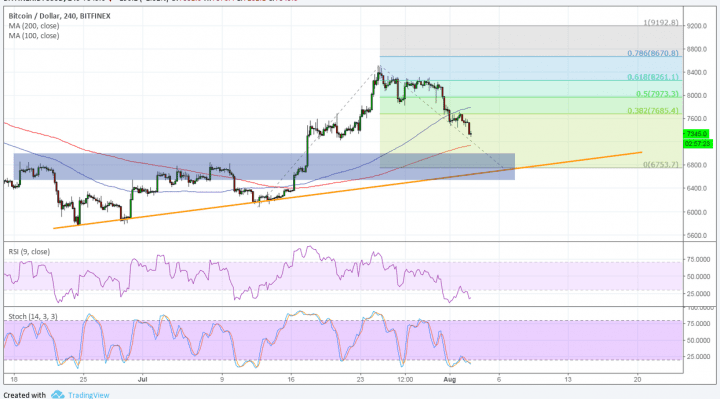 Bullish pressure might still have a good chance at returning while bitcoin remains in correction territory, giving up less than half of the gains so far this month. Keep in mind that factors like increased institutional interest are propping bitcoin up and that the dips have mostly been due to minor news events, such as negative commentary from well-known economists.

The dollar has been able to take advantage of this, though, likely due to upbeat data supporting further Fed tightening and some safe-haven demand on trade war tensions.