Bitcoin is maintaining its climb as it bounces off the short-term rising channel support and sets its sights on upside targets next. In particular, the 61.8% extension could serve as a near-term ceiling since it lines up with the channel top around $7,300.

Stronger bullish momentum could take bitcoin higher to the 78.6% extension at $7,457 or the full extension around $7,600. This is also around a longer-term area of interest, which has held as resistance and support in the past.

The 100 SMA is still below the longer-term 200 SMA on this time frame, though, so the path of least resistance is to the downside. However, the gap between the two is narrowing to reflect slowing bearish momentum and a possible bullish crossover. Price found support at the 200 SMA dynamic inflection point as well since this lines up with the channel bottom. 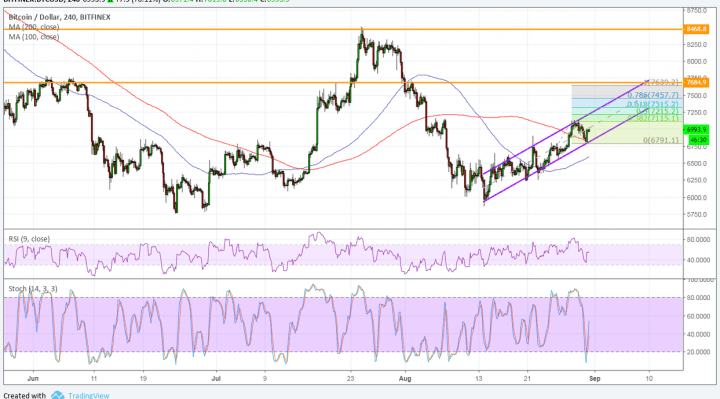 RSI is starting to turn higher and has some room to head north before hitting overbought territory. Stochastic also just made its way out of the oversold region to signal that buyers are just warming up and could keep the uptrend going for a bit longer.

Even with the dip in risk appetite owing to Trump’s renewed tariffs threats on China, bitcoin has managed to bounce off the floor likely on optimism that the SEC could soon grant approval to ETF applications. Recall that the regulator previously rejected nine applications but almost immediately announced its plans to review this decision.

More bitcoin ETF applications are awaiting their ruling by the end of September, and any indication that approval is in the works could spur a wave higher for bitcoin and its peers. Rejection could still lead to dips but it’s likely the companies will just make revisions and resubmit their proposals soon. In the meantime, month-end profit-taking flows are expected and might lead to a bit more volatility in the days ahead.