Bitcoin might be done with its slide as it formed a double bottom reversal pattern on its 1-hour time frame. Price failed in its last two attempts to break below the $6,800 handle and might be ready to test the neckline at $7,150.

This lines up with the 100 SMA dynamic inflection point, which is below the longer-term 200 SMA to signal that the path of least resistance is to the downside. In other words, the downtrend is more likely to resume than to reverse.

RSI is on the move up, though, so there may be some buying pressure left to trigger a climb to the nearby resistance levels. The chart pattern is around $350 tall so the resulting climb could be of the same height, taking bitcoin to the next resistance at the 200 SMA dynamic inflection point.

Stochastic is also climbing so bitcoin might follow suit. However, the oscillator is also nearing overbought levels to signal exhaustion among buyers. A return in selling pressure could lead to another dip to the bottoms or perhaps a break lower. 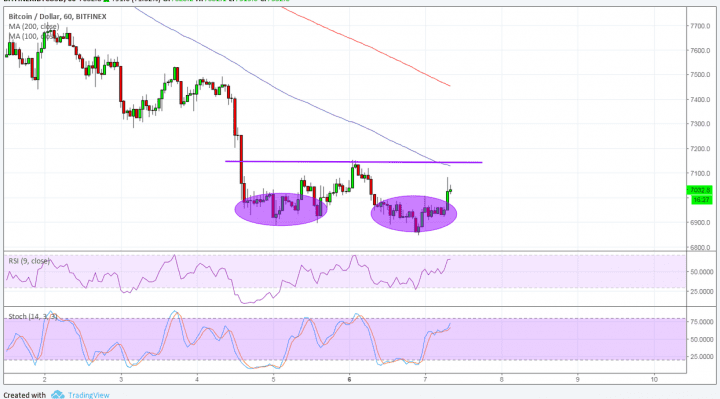 Bitcoin is still waiting to get another set of positive updates to buoy it higher after a rough week. So far it seems that news from Goldman Sachs is providing some support.

The financial institution is reportedly considering custody offering for crypto funds, which involves holding securities on behalf of the funds, reducing risk for clients while at the same time guarding themselves from hacking incidents on exchanges.

This could revive optimism that institutional interest could prop the industry higher throughout the latter half of the year, possibly taking bitcoin to the upside price forecasts of as high as $25,000 by the end of the year or at least until last year’s record highs.

However, if negative commentary or hacking incidents once again make their way to headlines, profit-taking off this bounce could ensue.