Bitcoin is starting to trend lower after its stellar rallies as the US dollar has regained strength recently. Price is moving inside a descending channel formation on its 15-minute time frame and is currently testing the resistance.

If it holds as a ceiling, bitcoin could fall back to support around $8600. The 100 SMA is below the longer-term 200 SMA to confirm that the path of least resistance is to the downside or that the selloff is more likely to resume than to reverse.

Stochastic is pointing up to signal that buying pressure is in play. An upside break past the channel resistance around $10000 or the 200 SMA dynamic inflection point could be enough to confirm that the longer-term uptrend is resuming. RSI is on its way down but is starting to head sideways to signal consolidation. 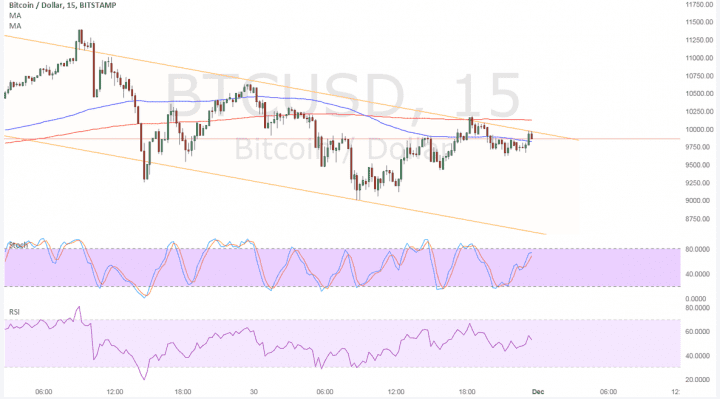 The US dollar has been gaining traction recently as tax reform continues to take steps forward. After having passed the Senate Budget Committee and getting a positive revision from the JCT, the bill also gained the support of Republican Senator McCain.

The Senate now moves to a full vote on the bill that might happen before the end of the week. Approval could send US equities and the dollar higher, thereby dampening demand for bitcoin as traders reestablish their stock positions. On the other hand, setbacks could force the dollar to retreat against most of its peers.

By the looks of it, the enthusiasm over the pickup in retail activity and volumes has died down as traders also booked profits off the recent rallies. The attention now shifts to the CME bitcoin futures launch that many are still hoping to see before the end of the year. If that happens, volumes could enjoy another boost and also lift bitcoin price higher.

Geopolitical risk could also be in favor of bitcoin as prevailing tensions with North Korea could keep traders on edge. Escalation could drive demand back up as traders seek higher returns outside of stocks and commodities.