Bitcoin has completed its pullback from last week’s rally, bouncing off the ascending trend line connecting the lows since the start of the month. This also lines up with a Fibonacci retracement level and applying the extension tool shows how high it can go.

The 100 SMA is above the longer-term 200 SMA so the path of least resistance is to the upside. The 200 SMA has also held as dynamic support and is in line with the ascending trend line, adding to its strength as a floor in the event of another dip.

Stochastic is pointing up to confirm that buyers are in control of bitcoin price action at the moment. RSI is also heading north so bitcoin could follow suit. 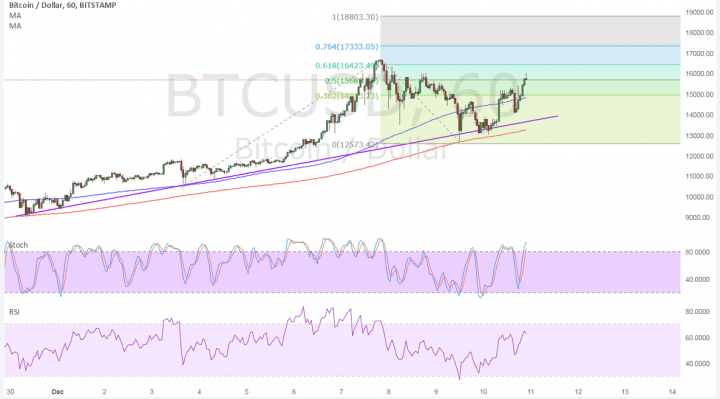 CBOE has launched its bitcoin futures product but the price has dipped after the website crashed on overcapacity. This illustrates the amount of investor interest in bitcoin, but traders are worried that similar crashes might not be avoided in the future.

CME is set to launch its own bitcoin futures products later this month while Nasdaq will have its launch by early next year. This could draw more trading activity at higher volumes, potentially lifting bitcoin price much higher in the weeks ahead.

Meanwhile, the dollar could have a boost of its own from the FOMC as it gears up to make its rate statement this week. A hike is widely expected but the economic projections and presser could be of greater interest. Dollar price action could hinge on update inflation forecasts and the chances of seeing more interest rate hikes next year.

Recall that Fed head Yellen gave a less upbeat outlook on inflation, and this was echoed by the FOMC minutes for the previous statement.