Bitcoin continues to trend higher but is pulling back from its short-term rebound. Applying the Fib tool shows the nearby support levels, with the 38.2% retracement level lining up with an ascending trend line.

This also coincides with an area of interest so bulls could be waiting with their buy orders right there. The 100 SMA is above the longer-term 200 SMA to signal that the path of least resistance is to the upside and the short-term moving average is also holding as dynamic support.

The gap between the moving averages is widening to reflect strengthening bullish momentum. However, both stochastic and RSI are on the move down to signal that sellers have the upper hand at the moment. A larger correction could last until the 200 SMA and 61.8% Fib at $15324.53 or until both oscillators turn up from the oversold region. 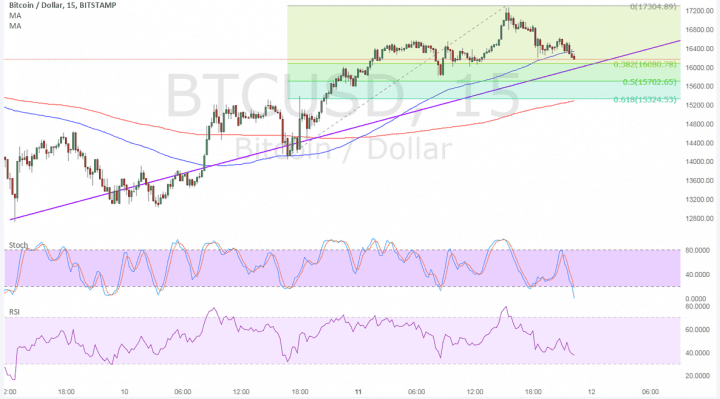 Bitcoin drew support in anticipation of the bitcoin futures launch but fell when an outage overcapacity occurred. A rebound has happened since then and the cryptocurrency is regaining lost ground back to its record highs. CME and Nasdaq are also gearing up to launch bitcoin futures so more gains could be in the cards as it benefits from institutional and retail investor interest.

Meanwhile, the dollar has plenty of event risks lined up. One of these is the FOMC decision, which could see a 0.25% interest rate hike. However, traders are more interested to find out about tightening odds for next year and the updated economic projections could provide some clues.

US retail sales and CPI are also up for release this week and stronger than expected results could assure dollar bulls that the central bank might stay hawkish for the next few months. Trump is due to make a speech on tax reform to urge members of the Senate and House to work together in merging their respective versions of the tax bill and get it ready for implementation soon.