Bitcoin is starting to trend lower on its 1-hour time frame, moving inside a descending channel pattern and testing support. A bounce off this area could take price back up to the channel resistance around $17,500.

Note also that bitcoin is testing a longer-term area of interest just above $16,000. This level previously served as resistance and could now contain plenty of buy orders. In that case, a pickup in bullish momentum could be enough to sustain a move past the channel resistance and onto the all-time highs.

Stochastic is moving up but also approaching overbought levels. This means that buying pressure is in play but also starting to weaken, especially once the oscillator makes it below the overbought region. RSI, on the other hand, seems to have room to climb, indicating that buyers could still defend the floor at $16,000. 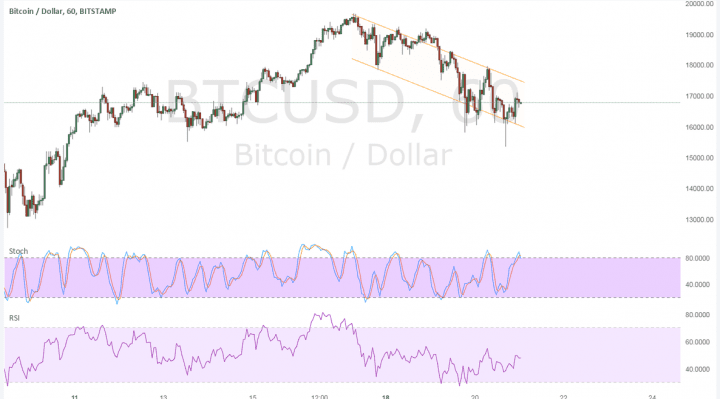 The dollar is well-supported too as the US is now moving closer to seeing tax reform. Both houses of Congress have already approved the bill and will be signed by the President into law. Once enacted, it would mean a big boost to businesses and consumer activity, thereby lifting overall economic growth and keeping the central bank on track to hike again a few more times.

With that, investor interest is returning to US equities after bitcoin has shied away from surging past the $20,000 barrier. Profit-taking appears to be setting on before the year comes to a close as doubts that further gains are in the cards have convinced some bulls to lock in their winnings for the year.

Besides, there aren’t a lot of catalysts left for bitcoin, with futures already launched on the CBOE and CME. Nasdaq is said to be prepping for its bitcoin futures for next year. However, there are still a few network upgrades lined up that could mean risks and volatility to bitcoin.