Bitcoin is still in correction mode from its stellar rally in the past few weeks. Price is now testing the 61.8% retracement level on the latest swing low and high on the 4-hour time frame.

This Fibonacci retracement level lines up with an ascending trend line that has been connecting bitcoin lows since mid-November. A bounce off this support zone could take it back up to the swing high or at least until the nearby areas of interest.

Stochastic still seems to be heading south but is starting to pull up to indicate a return in bullish pressure. RSI has more room to fall so the correction could stay in play for a while. The 100 SMA is above the longer-term 200 SMA to confirm that the path of least resistance is to the upside, but the gap is narrowing to reflect weaker bullish momentum. 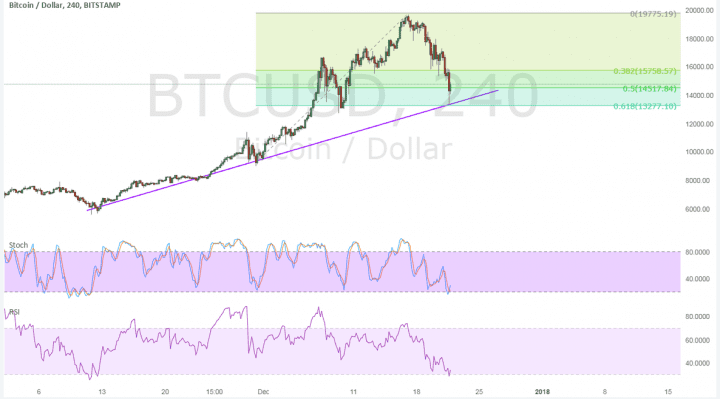 Bitcoin seems to be getting hit by profit-taking ahead of the holidays and the end of the year. This could lead to more declines in the weeks ahead, especially since there’s hardly any catalyst that could spur another strong rally similar to the launch of bitcoin futures.

Then again, keep in mind that a number of network upgrades are scheduled all the way up to March 2018. This would address hard fork concerns and likely leave the bitcoin network more stable and able to handle more transactions. If previous price action following the earlier hard forks are any indication, it could still lead to strong gains for bitcoin price.

Meanwhile, the dollar is taking advantage of the bullish sentiment after the tax reform bill was passed. This would pave the way for corporate tax cuts that would greatly benefit businesses and consumers. This would likely lead to stronger growth in the months ahead, keeping the Fed in its hawkish stance and on track to hiking rates in a few more instances.