Bitcoin is starting to trend higher once more, moving inside an ascending channel on its 1-hour time frame. Price is making its way close to the mid-channel area of interest after having bounced off the bottom, but the moving averages are in the way.

Still, the 100 SMA is crossing above the longer-term 200 SMA to show that the path of least resistance is to the upside. This means that the rally is more likely to continue than to reverse. In that case, bitcoin could climb back up to the channel resistance around $17,000.

However, stochastic is turning down from the overbought region to indicate that sellers are regaining the upper hand. RSI has a bit more room to climb so bitcoin might follow suit. A return in selling pressure could lead to a test of the channel bottom at $14,000 or even a break lower. 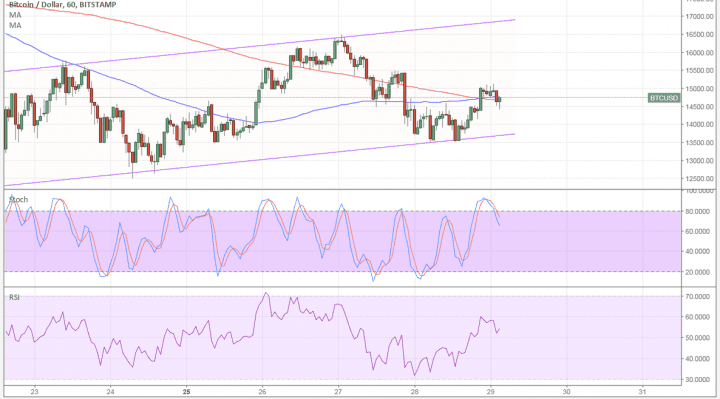 Bitcoin seems to have lost its mojo after South Korea’s government increased its efforts to curb bitcoin trading. This could keep a lid on global volumes and activity as the nation is one of the top markets of bitcoin.

Besides, the US dollar has regained some ground on the heels of the GOP tax reform package, which was signed into law earlier this month and ready for implementation soon. This would mean a big boost to businesses and therefore equities, likely drawing traders back to US stocks and away from bitcoin.

Then again, the cryptocurrency has a few network upgrades lined up and this could speed up transactions while rendering rivals weaker in comparison. In that case, demand could still have a chance at picking up in the coming months as the upgrades are scheduled all the way until March next year.

As we wind down to the last few trading days of the year, though, profit-taking could be a big factor and might force bitcoin to return more of its recent wins.