Bitcoin continues to trend higher but is slowing from its climb, signaling that another correction may be in the works. Price is still trading above an ascending trend line that’s been holding since mid-November.

Bitcoin is also stalling around the 61.8% Fibonacci extension while stochastic has moved down from the overbought level. This signals a return in bearish pressure that could take it down to the support around $11000. RSI is also heading south so bitcoin might follow suit.

The 100 SMA is safely above the longer-term 200 SMA so the path of least resistance is to the upside. This means that the rally is more likely to resume than to reverse. Stronger bullish momentum could lead to an upside break from the short-term consolidation and a move to the full extension at $12,869.54 or until the next resistance at $12,037.11. 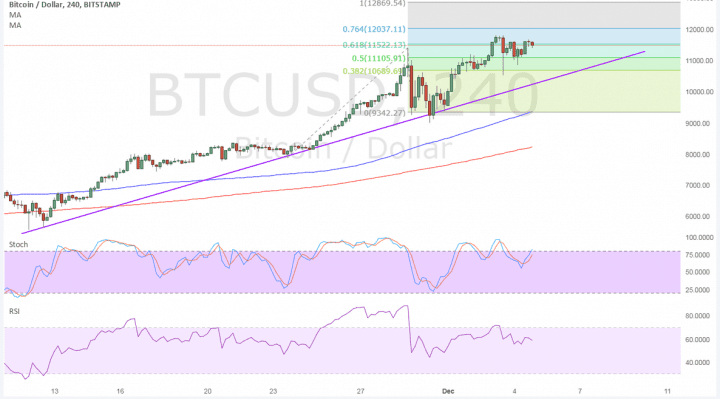 Bitcoin is anticipating the launch of futures on the CBOE exchange, which would come ahead of the CME and Nasdaq. This could bring in a fresh wave of investor activity and higher volumes, which typically lead to a huge boost in price.

However, the US dollar is also holding its own thanks to progress in tax reform. The House and Senate are scheduled to convene this week to merge their existing versions and, although roadblocks are expected, any positive developments could still be bullish for the US currency.

Another potential risk for the dollar is the investigation into Trump’s dealings with Russia as this could bring about more political uncertainty. The NFP report is also up for release and even though December hike expectations are pretty much sealed in, this could still impact tightening hopes for 2018, especially with a change in Fed leadership.

Traders are looking, in particular, at the average hourly earnings figure to gauge evidence of wage growth and future inflationary pressure. Downbeat readings could further weaken the inflation outlook and lead to lower hopes of more hikes next year.