Bitcoin has broken out of its rising wedge consolidation pattern to indicate that bulls have won out. This signals that further gains are likely, possibly around the same height of the chart formation.

This pattern spans $9000-$12000, so the resulting rally could last by the same height in the long run. However, there are signs of a potential pause and profit-taking from the latest climb.

Stochastic is already indicating overbought conditions and could be due to turn lower, which would draw sellers back to the mix. Similarly, RSI is starting to turn lower from the overbought level, so bitcoin could follow suit. A pullback to the broken wedge resistance around $11800 could take place before the climb resumes.

The 100 SMA is still above the longer-term 200 SMA on the 1-hour time frame so the path of least resistance is to the upside. This means that the rally is more likely to resume than to reverse. A larger pullback could last until the wedge support or the 100 SMA dynamic inflection point. 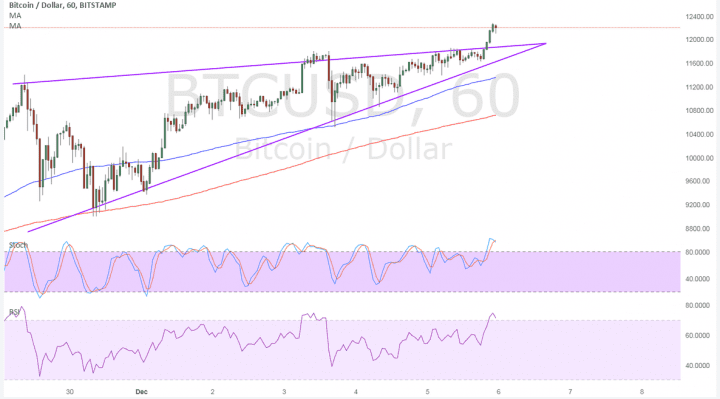 Bitcoin remains strongly supported by anticipation for the CBOE bitcoin futures launch, to be followed by the CME and Nasdaq. If these go by without much glitches, investors could have better access to bitcoin on the retail level, which would mean stronger activity and higher volumes.

If the previous reaction to the addition of 100,000 Coinbase accounts a few days back is any indication, it’s that bitcoin could be poised to surge to yet another set of record highs on this event. Of course this also comes around the same time as three derivative products will be launched to enable traders to short bitcoin, which could also keep a lid on gains.

Meanwhile, the dollar also remains supported by US tax reform optimism so far. The bill in Senate has been able to clear one hurdle after another and is due to be merged with the House version as the talks kick off soon.