Bitcoin is still trending lower inside a descending channel visible on its 1-hour chart even after its latest rally. In fact, price has some ground to cover before attempting to break past the channel top.

The 100 SMA is below the longer-term 200 SMA to signal that the path of least resistance is to the downside. In other words, the downtrend is more likely to resume than to reverse. The gap between the two is narrowing, indicating that selling pressure is fading and that buyers might take over if a new crossover materializes.

Price is testing the 38.2% Fibonacci retracement level around the mid-channel area of interest. A continuation of the slide could lead to a test of the swing low or the channel support closer to $3,000. A larger pullback, on the other hand, could take it up to the 61.8% level at the $4,000 major psychological level.

RSI is turning lower to signal that selling pressure could stay a bit longer. The oscillator has plenty of ground to cover before indicating oversold conditions after all. Stochastic is also heading down and is dipping into the oversold region to signal that bearish pressure might be exhausted soon. 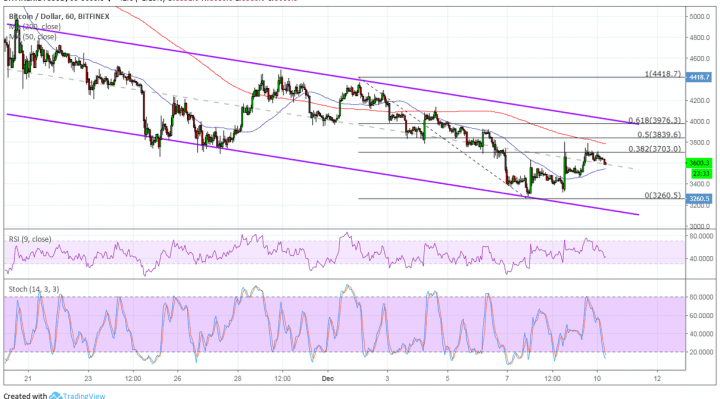 Bitcoin is still struggling to shake off the bearish vibes as sellers are quick to hop in on pullbacks while buyers are also booking profits right away. Traders are likely holding out for a major positive development before sustaining any rallies with larger long positions.

For now, there seems to be no catalyst on sight as the SEC already delayed its decision to February next year for the bitcoin ETF applications. Investors are waiting on institutional funds to kick in, but this is likely to wait until the first quarter next year and volumes might be much lower than initially anticipated.