Bitcoin is trending lower on its 4-hour time frame and is testing the mid-channel area of interest on its descending channel. If this holds as resistance, price could make its way down to the Fibonacci extension levels next.

The 50% level lines up with the swing low where sellers might book profits while the 61.8% level is closer to the channel support. The 78.6% level coincides with the $3,000 major psychological mark, which could also be where buyers might be waiting. The full extension is at $2,731.90.

The 100 SMA is below the longer-term 200 SMA to indicate that the path of least resistance is to the downside. In other words, the selloff is more likely to resume than to reverse. The 100 SMA also held as dynamic resistance on the pullback and might keep gains in check from here.

RSI is heading lower to show that bearish pressure is in play and has some room to head south before indicating oversold levels. Stochastic is also just halfway through on its move lower, which suggests that bears could hold on to the upper hand for much longer. 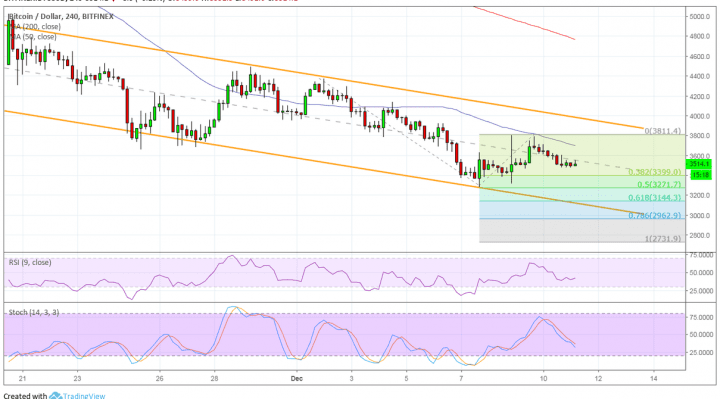 Bitcoin is struggling to pull up from its slide, which many believe could take months to undo. Traders have been quick about booking profits on recent rallies, barely giving the correction any traction or a chance at a reversal. It would take a significant industry update to sustain any rallies from here.

Still, there’s hope that a pickup in institutional investment by early next year could be a catalyst for a big bounce. Price would need to bust through the $4,000 major psychological level then the 200 SMA dynamic inflection point to indicate that a reversal may be in order, but there’s no much momentum in bitcoin’s favor at the moment.

A break below the channel support could confirm that the bear market is far from over and that a steeper slide may be underway.