Bitcoin is forming higher lows and higher highs to create an ascending channel visible on the 1-hour chart. Price is currently testing support and could be due for a bounce to the top at $3,800.

The 100 SMA is below the longer-term 200 SMA, though, so the path of least resistance is to the downside. In other words, support is more likely to break than to hold. In that case, a reversal from the shallow uptrend may be underway. Price is trading below the moving averages to signal that bearish pressure is in play.

However, RSI is on the move up to indicate that bullish momentum is present. This oscillator has some room to climb before indicating overbought levels, which means that buyers could hold on to the upper hand for a bit longer. Stochastic is also on the move up so bitcoin might follow suit while buyers are in control.

In that case, price could still climb to the top of the channel or at least until the mid-channel area of interest that is close to the 200 SMA dynamic inflection point. A break below $3,400 on the other hand, could mean a continuation of the longer-term slide. 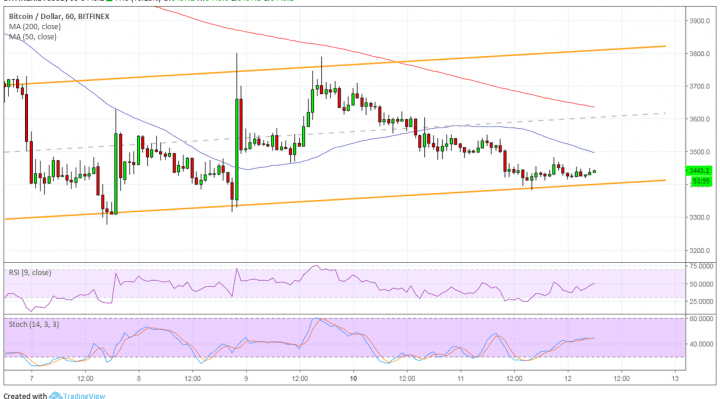 Bitcoin is putting up a good fight as bulls are trying harder to defend support levels by buying on dips. Of course it’s a question of whether this behavior would last or not as another strong pickup in FUD sentiment could mean another leg of losses.

Many are still holding on to optimistic forecasts for bitcoin and the industry, with Mike Novogratz citing that bitcoin is still likely to be digital gold and outlast its competition. Institutional investment is still expected to kick in early next year, after all, and the pickup in volumes might be enough to revive interest and price gains.