Bitcoin seems to be breaking below its symmetrical triangle pattern to signal that further losses are in the cards. Price could fall by the same height as the chart formation, which spans $3,300 to $3,900 in that case.

The 100 SMA is below the longer-term 200 SMA to indicate that the path of least resistance is to the downside. In other words, the selloff is more likely to resume than to reverse. Price is closing below the 100 SMA dynamic inflection point also, indicating that selling pressure is building up.

RSI is on the move down to confirm that sellers have the upper hand. However, it is nearing the oversold region to signal exhaustion. Turning back up could mean a return in bullish momentum and a possible bounce back inside the triangle.

Stochastic is also in the oversold territory and pulling higher could indicate that buyers are ready to return. A bit of bullish divergence can be seen as price made higher lows while this oscillator had lower lows. 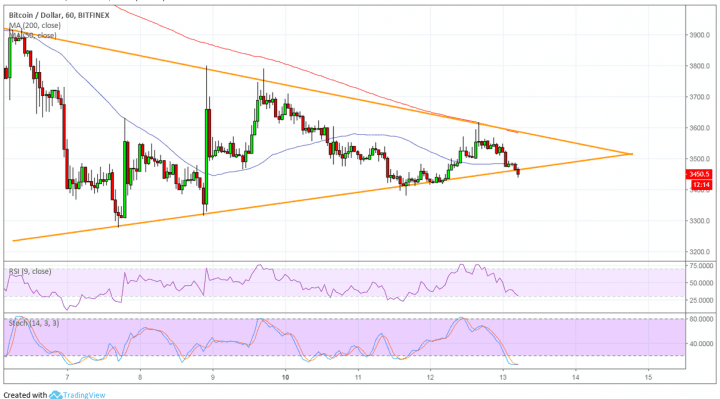 Bitcoin has had a lot to deal with in the past weeks but it looks like traders are trying to defend support levels. If they are able to keep this triangle intact, price could bounce back up to the triangle top around $3,600 and the 200 SMA dynamic inflection point. Stronger bullish momentum might even lead to an upside break and a rally that’s at least the same height as the chart formation.

However, it would take a really strong upbeat development to encourage more buyers to hop in an sustain any rallies. By the looks of it, bulls are being quick to book profits even on small bounces for fear of further declines taking place. Expectations for institutional investment are still in play but to a weaker extent, so markets may be looking for actual evidence of higher volumes before piling on long positions.