Bitcoin looks ready to resume its longer-term slide as it closed below the bottom of the symmetrical triangle consolidation. In addition, price is moving inside a descending channel and may be due for a pullback to the top.

RSI is already indicating oversold conditions or that sellers are feeling tired. This could allow buyers to take the upper hand and spur a bounce to nearby resistance levels where more sellers might be waiting. Stochastic is also starting to pull up from the oversold region to signal a return in bullish momentum. A bullish divergence can also be seen as this oscillator made higher lows and price had lower lows.

However, the 100 SMA is still below the longer-term 200 SMA to indicate that the path of least resistance is to the downside. In other words, the downtrend is more likely to resume than to reverse. These moving averages are also close to the short-term channel top and the broken triangle support, adding to its strength as a ceiling in the event of a correction. 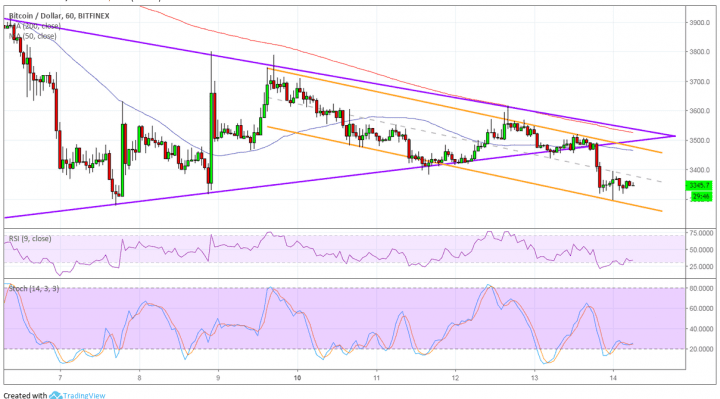 Bitcoin has been unable to shake off the negative sentiment over the past few weeks and bulls seem to no longer be strong enough to defend long-term support zones. The break lower suggests that the bear market may be far from over and that price could dip much lower before any rebound happens.

Still, big names in the industry are holding on to bullish forecasts, such as Tom Lee of Fundstrat who maintains that the fair price of bitcoin is $13,800 to $14,800. He even cited that getting a larger share of client accounts or active crypto wallets could bring its value to up to $150,000 per coin.

For now, investors are holding out for stronger signs of a rebound or perhaps big industry developments and signs that volume is picking up before reviving their positions.